I picked up this compressor today.
Got it from a friend and it was a steal,payed him 100 euro for it.
He was happy to get rid off it and I have an other compressor.
Its a Bauer KA14 from 1962. Can't seem to find much info on it.
Does someone have more info about this unit.
I am also looking for a workshopmanual and parts list.
regards

It may take some searching but i'll bet you can come up with the info.......I own an Alkin but if I didn't I'd own a Bauer/Mako....With a little service and TLC your compressor will probably outlive all of us.
Doing it right should include some common sense, not just blindly following specs and instructions. .Gary D, AWAP on SB

Bauer has a good track record. I think a lot of the internal parts for your 1962 block are still available. External accessory items like separators and intercooler tubing are probably not available in the same configuration, but substitutions can normally be made with minor modifications in tube, fittings and mounts etc.

Check out www.augustindustries.com for supplies, parts and fittings. They are a top ten Bauer distributor in the US, and have one of the largest stocks of Bauer parts this side of the US factory in VA. They are in TX but ship all over the world. They may not have a manual that old available other than their shop copy, but you might find one posted online.

Nobody like to hear this, but a potential safety issue in old compressors is metal fatigue in old aluminum moisture separators and filter housings. Bauer has put in print that those items should be retired after 15 years. This is a fairly recent suggestion, but not universally adhered to.
I'll see if I can find that bulletin to post. Disassembly and inspection is seldom done on separators and filters, but should be. Most everyone agrees that is important in SCUBA cylinders.
The older I get the better I was.

I had a crack in one of the moisture separators of my RIX... Remember Bill? Yes, it does happen. Kind of unnerving to be looking for a leak and find it is actually a crack and right next to your face when you finally see it.

SurfLung wrote: ↑
Wed Mar 07, 2018 3:56 pm
I had a crack in one of the moisture separators of my RIX... Remember Bill? Yes, it does happen. Kind of unnerving to be looking for a leak and find it is actually a crack and right next to your face when you finally see it.

I'm glad you brought that up. I hate to sound like I'm being overly-cautious... but, yes, it does happen, and your case is a good example.
The older I get the better I was.

Thanks everybody for the replies.
Been looking for info on the net but there is not a lot about the KA14.
From the K14 no problem. They are similar but there are some differences .
I am aware about the bauer bulletin,I used to work in a dive shop for comercial diving gear here in Belgium
and we serviced bauer compressors. If I can remember it was only for the alluminium housings.
I have not checked yet but I think the seperators on this compressors are made of steel.
Good idea to give them an inspection thow. I use an old bauer Utilus now to fill my tanks. It was also a home build unit from somebody.
Probably build someware in te seventies. They used alluminium Hydraulic oil filters as moisture seperators. There where two in series an one of
them was also cracked.

I was wondering,would it hurt the compressor if I let it spin a litle bit faster?
850 to 900 rpm instead of 750 rpm. If I recall correctly some models of bauer came from
the factory with diffirent fill rates but the same pump. Only the rpm where different.

780... Wow that's a nice, low RPM for 3.52 CFM fill rate. My RIX runs at 2300 RPM for 3.0 CFM fill rate... Which is really screaming in comparison to others. When I bought it used, it was set up to run slower in a commercial airgun setting... Using one of those composite fire department tanks for a storage bank. It was filling tanks at about 2.0 CFM and I thought it was needing rings and head seals to get it up to the proper 3.0 fill rate. Then my friend and Compressor Guru Antique Diver said, "What's the RPM?" Long story short, we discovered the pulley on the motor was smaller than spec, making the compressor run at lower than spec RPM (probably to save wear and tear in an automated commercial setting). We got the thing set up with the right diameter pulley (sheave) and it now fills at the rate specified in the manual... 3.0 CFM at 2300 RPM.

I was reading about the Alkin W31 and they say it's long lasting and durable because it runs at a slower 1200-1400 rpm for 3.7 CFM fill rate and doesn't put much wear and tear on itself. I run my RIX at the maximum spec but I don't think I would run it faster than spec. I don't want to break it!

I have been clearing the workbench yesterday and wil start taking the compressor appart next week.
Will post some pictures while I go. Wil do an inspection en renew gaskets and O-rings.
Planning on cleaning everthing to so I can switch to synthetic oil. Will have to use my commen scence bacause
finding a workshop manual for a compressor this old seems inpossible.

I have begun to dismantle the bauer today.
It has some wear and probably has had a rough life with pour maintenance but
I think it can be saved to fil my tanks once or twice a weak in the summer.
The biggest problem I have found is the stuck fourth stage floating piston.
I dont know if its just stuck from not been run for so long or if it has seized while running.
There was oil in the oil tube going to the piston so I hope its the first option.
It is soaking in releasing fluid and I hope it wil come loose. I dont know if there is a better way
of doing it? I also think the bearings and oil seals need replacement so I think I wil take it appart to the last
nut. The final moist trap had an home made attempt to make a filter in it. The tube is badly pitted and wil have to be replaced.
I also had two pressure lines that where disconnected. I did not know were these where for. They come from T connections on the first
stage and the third stage. I have followed the lines and the only thing I can think of is they are for mannometers. So you can monitor the stage pressures,but I am not sure about this. 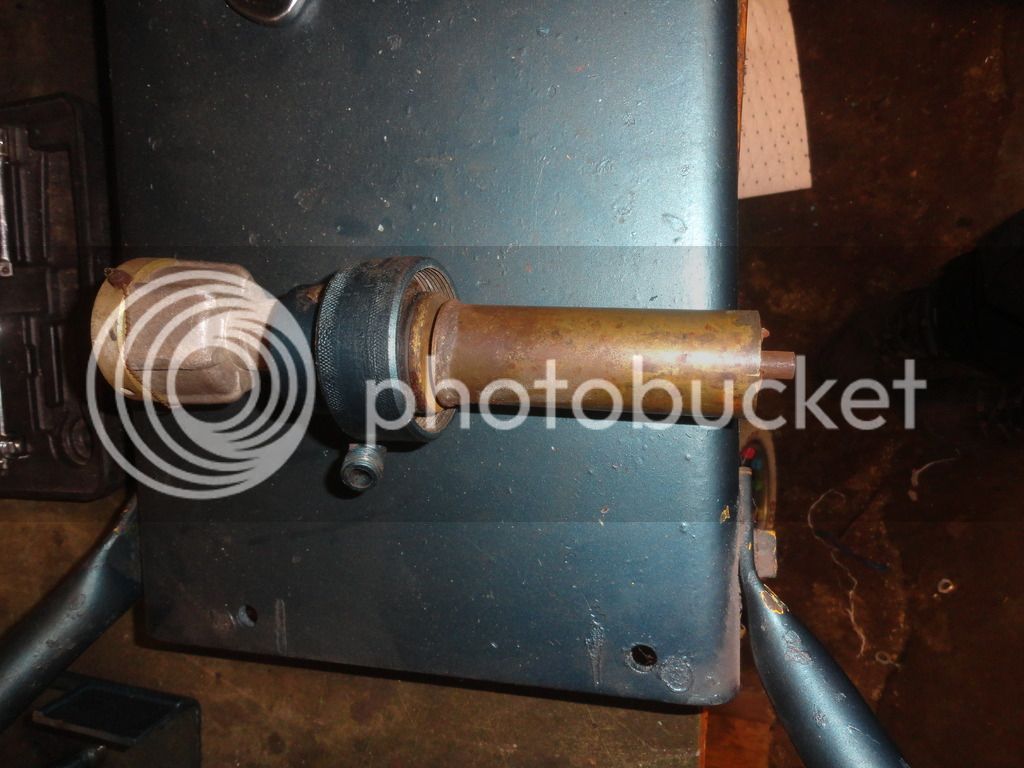 That doesn't look bad for its age. The first stage is way better than I would have expected, and the drive piston for the final stage is good too.

The final piston could be an issue. It is perfectly machined and matched fit to fit the piston sleeve... sold only together. (expensive) It is so nice a fit that piston rings are not used on the K14 models, and I would guess not yours either. The oil pump sends about 800 psi of oil into the bore in the K14, so the piston is actually just sealed by the oil film. If you are able to free yours up be very careful and only clean up evenly with maybe1000 paper kept wet with oil. As you can imagine, it has to be in really good condition to work. I have a feeling there is still a piston & Sleeve set available that will fit. If anyone has it it will be August Industries. Try Casey or Porter at 972-245-7000. I just tried but they are gone for the day.

On your earlier question about speed, the K14's were commonly turned faster than yours to produce about 7 to 9 cfm with 7.5 to 10 hp motors. I'll look for some specs on that... got it somewhere.
The older I get the better I was.

Clarification about piston rings on last post: The first three stages use conventional pistons with rings. Only the final stage is ringless on the K14 and many other other Bauers.
The older I get the better I was.

This is information and experience that future generations will not have unless we share it and archive it somehow. Thank you Bill!
Doing it right should include some common sense, not just blindly following specs and instructions. .Gary D, AWAP on SB

Bryan, you're welcome. I just wish I knew more about the KA14.

Tim, there could be significant differences in the KA version that make it better suited to the lower RPM, such as less efficient cooling fan and coils. I did find reference to the K14 being used at 950 RPM, but I am not advising going higher on the KA unless I get more info from Bauer.

Actually, I find 3.5 cfm is sufficient for my home use anyway. My electric compressor at home is a little Bauer Utilus 10 that is about 3 cfm. I usually am doing other things while filling tanks, and I don't mind the time it takes.
The older I get the better I was.
Post Reply
42 posts