Forum rules
Discussion of diving methods and equipment available prior to the development of BCDs beyond the horse collar. This forum is dedicated to the pre-1970 diving.
Post Reply
144 posts

About 6 years ago my daughter found this magazine, and knowing my penchant for all things related to vintage diving gave it to me for Father's Day. I have been wanting to do this since then. So I am finally getting started on this new project after recently acquiring the requisite WWII era Bendix Aviation Oxygen regulator from Bryan at Vintage Double Hose.

It's a good thing I didn't find this Popular Science article when I was 12, or I'm pretty sure I would have tried this then... and maybe wouldn't be around to tell about it now.

Other things take precedence right now, but I have already started working on it a little at a time and will be posting photos and news of the progress. I would like to hear from any others who may have done this and may be able to help advise of better ways to do it. I originally planned to do it as close a possible to what the article shows, but have since decided to make some mods that better suit me. I'll still retain as much as possible of the technology (or lack thereof) and parts of that busy era of homemade diving gear.

More to come.
You do not have the required permissions to view the files attached to this post.
The older I get the better I was.

O2 Reg.JPG
First look inside the Bendix shows the fragile, crumbly diaphragm, which was exactly as expected considering the age. Doesn't scare me yet, as I have made them for several other old diving regs.


O2 Reg inside.JPG
With the old diaphragm removed it doesn't look so bad. You can see the first stage in the upper section, and the second stage demand lever below that. I added the red mark for clarity. Starting to look very similar in function to more familiar Scuba regs.

I got brave and hooked up an 1800 psi air source to the inlet, and had a big surprise. The first and second stage seats are holding pressure, and the lever works smoothly! Haven't cleaned up a thing yet. Some of my major concerns are fading, but I still expect some roadblocks along the way to completion. Won't be able to devote much time to this project in one block.... just a little bit here and there, but I am optimistic now.
You do not have the required permissions to view the files attached to this post.
The older I get the better I was.

I think you should build the flippers that are also in that issue! Keep the updates coming Bill.

Sent from my SM-J700T using Tapatalk

I think I'll get a bag of peanut M&M's in anticipation of this thread! Looking forward to seeing your posts Bill!

I'm going with Red Vines and Junior Mints. Looking forward to the show!
"The diver who collects specimens of underwater life has fun and becomes a keen underwater observer. .. seek slow-moving or attached organisms such as corals, starfish, or shelled creatures." (Golden Guide to Scuba Diving, 1968)

Thanks for the interest guys! Here's a little more.

There are a lot of modifications to the Bendix reg to prepare it for diving use, but since I expect getting the diaphragm right may be the most challenging I decided to start there. May take several tries to get it right. The first step was making a form/jig to shape the new diaphragm. Starting with a PVC pipe bushing I cut it to size and similar shape of the Bendix's outer dimensions.
making jig.JPG

Using the metal support that was under the original diaphragm I set it up in a trial position. The diaphragm will have to overlap the sides, coming down just past the circumferential groove. The groove is where the lower edge of diaphragm will be tied in place with wraps of thin thread on the actual body.
Diaphragm Jig mod 1.JPG
Thin stretchy mesh nylon-like material is stretched over the form, and will be thinly coated with "flowable" Silicone sealant. It makes a very soft and flexible diaphragm. If too soft, additional layers of Silicone can be used as needed to help the diaphragm keep its shape.
fabric base.JPG
After all this was done I ended up cutting the lower skirt of the diaph a little short, and it was also too soft to hold its shape while trying to tie it in place. Looks like another version coming up soon.
You do not have the required permissions to view the files attached to this post.
The older I get the better I was.

Sent from my SM-J700T using Tapatalk

Thanks Bryan. I'm going to need some good luck on this project. The second try with a diaphragm wasn't too great either, but it helped me come up with some ideas for plan 3.

Did a little cleanup on the Bendix internals & put a slightly stiffer spring in the 2nd stage. A little surprised to see that the second stage seat is so much like the ones we see in Scuba applications, and was able to replace the old one with a Mares seat! The second version of diaphragm is seen here with a single coating of flowable silicone, and it was a little limp. Probably will be better with a second coating, but I still have an additional change in shape in mind anyway.... so on to #3. Maybe I can get to work on it tomorrow.
O2 Reg &amp; diaph 2.JPG
You do not have the required permissions to view the files attached to this post.
The older I get the better I was.

That plate for the diaphragm looks a lot like the one Greg B. was trying to identify...

Thanks for pointing that out. It looks exactly the same with the minor exception of the very small center hole on mine for the attachment to demand lever. Amazing how designs get copied into different brands and types of regulators over a long span of time.
The older I get the better I was.

Thank you Eduardo. I have started a slightly different approach to the diaphragm shape, and hope to have some news soon.

Since the diaphragm is to be tied in place it becomes difficult to open it up for access to demand lever height adjustments. I'm trying to come up with an alternative attachment, but there is just not enough room for any other type of conventional clamp to hold it. Maybe I can hold it in place temporarily with a tight rubber band just to get a quick test in the water before tying. Third try at making a diaphragm is under way.
The older I get the better I was.

On to third version of the demand diaphragm, and I think this one will work out just fine. Haven't done an in-water test yet as several other modifications need attention first.
8.test 3rd diaph.JPG
Diaphragm in place and being temporarily held by rubber band for testing. It will be tied in place with wraps of thread like the original once everything is adjusted to suit me. May need to access lever height adjustment under the diaph and no easy way to reach it once it's tied on and the thread wraps siliconed over.

I can't believe that I was so anxious to try it that I breathed through that old-old-old hose without washing it out... tasted "very vintage".

It cracks too easy for diving use, but must have been really nice in its intended use. Cracks at about -0.3" WP, so I will either need a stronger demand valve spring or maybe just another coat or two of silicone on the diaphragm to get it up suitable for diving use. Now that sounds great, but the not-so-good news is that the air volume available is a little disappointing, and that's why I don't want to adjust the intermediate pressure downward. Unless I can improve the flow this reg will be limited to slow easy shallow diving, but that's ok just as long as I can make it work and come back alive.


7.venturi device.JPG
Removing a restrictive multi-part venturi device noticeably improved the flow volume. I realized that the venturi device on this regulator was designed only to pull in atmospheric air through a sophisticated altitude sensitive automatic gas mixing device. More about that later, but that really cool mixing system had to be removed for diving use as it would have just allowed water to mix with the diving gas. So, that particular venturi was of absolutely no benefit to breathing underwater, and was just causing a flow reduction in the modified for diving config. I'm really starting to have fun with this thing now.

Pausing for now, but will be working on the hose loop and exhaling valve soon. Will have to do a little amateur machining to make an adapter for the duckbill. It will look really goofy out in the open, just as shown in the magazine article, but I will go with that for the first version. I hope to come up with a better system later, but keeping it simple as possible for now.
You do not have the required permissions to view the files attached to this post.
The older I get the better I was.

Here's a few excerpts and tips from the 1953 Popular Science article on the "How to Use Your Diving Lung" page: (I wish someone had told me all this before I started diving

Using a diving lung is as safe as crossing a street.

Take several deep breaths before diving. They'll clear your lungs and get you a little ahead on your Oxygen needs.

Swallow any water that enters your mouth. it's easier than trying to blow it out.

Take a light rope along.... Tied to the boat or pier, it will be a comforting contact with your own world.

If you take too many weights down with you, you'll have to throw off the belt to get back up.

[A] long slow breath will bring in all the air you need; a quick sharp breath may panic you as the air may not seem to come through fast enough.

Important. Never hold your breath while coming up.


Here's a look at their photo of the finished product. Reg sure sits up high and the hose junction is really awkward. I hope to improve on that.
p.164 Lung.JPG
You do not have the required permissions to view the files attached to this post.
The older I get the better I was.

I remembered seeing some photos from early '50s MN divers using this type of regulator. 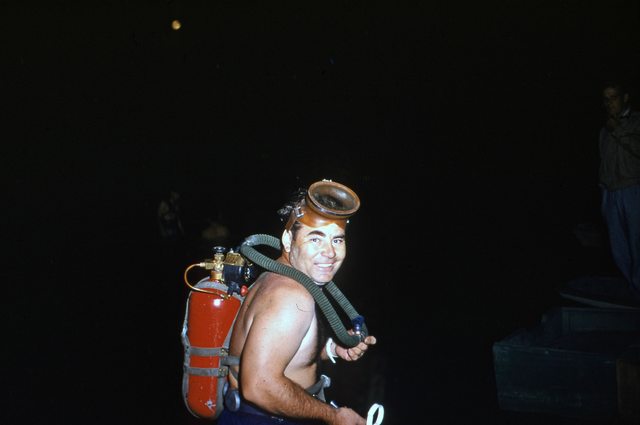 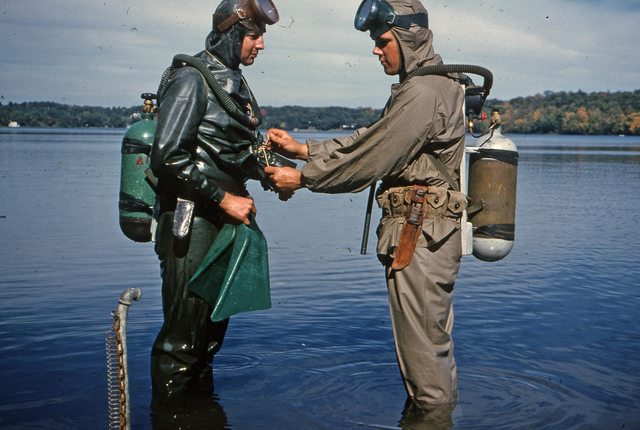 - These photos are from a bunch that were posted on Scuba Board by the son of Mr. Travis, of the Travis Dive Shop.
SurfLung
The Freedom and Simplicity of Vintage Equipment and
Vintage Diving Technique are Why I Got Back Into Diving.
Post Reply
144 posts

Users browsing this forum: No registered users and 23 guests