I took some comparative data of some of the exhaust valves used in double hose regulators.

To take the data I used a Magnehelic and a Dwyer flow meter.

To supply the air flow I used a blower (from a new shop vac that I bought specifically for this type of test) to generate relatively high flow rates.

Everyone can understand comparative testing even if you are not following the significance of non-dimensional Reynolds number scaling.

Let me just say that the test conditions are controlled to create a realistic and comparative conditions.

I adjusted the air flow to accurately reproduce the same conditions during all data collection. Only one variable was changed at a time following well established scientific methods for data collection.

Notice that this data is only for steady-state flow. The breathing cycle is closer to a sine wave / transient type of flow.

I tried to also take initial cracking effort (initial valve opening) data, but the numbers tends to be too low to accurately measure. The only observation I can add is that duckbills do tend to stick at times, but I think we have all observed that.


The Magnehelic that I was using only reads up to 5 inWC, therefore I only took data with a pressure delta below or equal to that level. You will see a couple of data points were I could not reach the 10 cfm level without exceeding the 5 inWC limit.

The pressure differential data is just the raw data as I read it. Some of it was expected, but some was a bit of a surprise.

The data was very easy to take with one exception, the silicone duckbill fluttered a lot with 10 cfm of flow. This caused the needle to move wildly. The reading shown was my best average of the fluctuating gauge.

Here are the test samples.

The Argonaut can is a 3D printed prototype. It is intentionally blurred in the pictures for a couple of reasons… There will be more pictures of the new cans in the near future.

Here is part of the test set –up.

Attached in this picture is the can with no valve used as a baseline for comparison testing.

Here is the Scubapro 109 connected for testing.

I bought this little vacuum cleaner specifically to use id as a blower for this type of testing (either for blowing or to generate suction/ vacuum).

This data will be very useful in the near future! The DBE does pretty well considering we sketched on a napkin between dives...

Luis, if possible can you share some of the data that was collected by Bernie and Mike at The Dive Lab a few years ago? I think there was some data on the early cans with removable exhaust horn.

Bryan wrote:
I'm running a water hose through the exhaust on an Argonaut right now so I can double check your results

I should have thought of that before I spent all the money on a calibrated flow meter, the blower, and all the other test gear...

Kidding aside, I may be purchasing a different flow meter for some other testing in the near future.
Luis

Bryan wrote:This data will be very useful in the near future! The DBE does pretty well considering we sketched on a napkin between dives...

IMO, the valve in the DBE is good. The limiting factor is the slightly reduced area needed to fit the tube into the horn. I think the design you guys did is about as good as it can get with the limitations imposed by having to interface with the metal can horn.

I personally think it performs very well. It is comparable to a regular rubber duckbill, and I never had any real complains about the "flow performance" of those. I personally don't like duckbills, but it is for many other reasons.

I just figured, going forward (with the Argonaut, etc.) we can do much better. And the way it is all coming together it looks like we are going to do a lot better.

Bryan wrote: Luis, if possible can you share some of the data that was collected by Bernie and Mike at The Dive Lab a few years ago? I think there was some data on the early cans with removable exhaust horn.

I will look for it, but the copies of graphs that I had were not very readable.
Luis

Thanks Luis, great data. When i switched my regs over to the DBEs i did notice that there seemed to be a little more resistance just blowing through the horn, but it wasn't detectable in the water and a small price to pay for not having to muck around with the duckbill. It is exciting to see the level of thought, testing and science that is going into the Argonaut, it is going to be a great product.

Just as a point of thought, being in the normal horizontal position with the valve being is a slightly lower pressure depth the perceived resistance may be less than the actual resistance. I wonder what the result would be if the exhalation valve were under 5 inches of water negative pressure.
Captain

The measurements do not include hydrostatic differences while being submerged. The test is equivalent as having the regulator position at the same level (depth in the water column) as the diver’s pressure sensor. In essence, the test is comparing all the different exhaust in a level plane with perfect regulator position.


Note: traditionally when discussing work of breathing (WOB) some of the traditional books talk about regulator location relative to the lungs. Our lungs have no sensation of pressure. I personally have thought for a while that the inner ear is the most likely location for pressure sensation, but the US Navy (NEDU, and others) take all the WOB measurements near the top of the throat (approximately). I am referring about the pressure sensors on the test dummies (dive simulators) used for testing WOB on rebreathers and other dive gear.

It is very interesting to hold a scuba tank with a DH in front of you while you are breathing from it and move up and down relative to you. I have done it a bunch of times… I close my eyes and feel for the breathing performance as I move the rig up or down relative to me. It is easiest to do it with a pony bottle or any small tank.

With a pony bottle, it is also easy to rotate the rig in order to test for relative position of the exhaust and the diaphragm (without the diver having to move).
Luis

Captain beat me to the punch re the WOB being affected by the pressure differential between the mouthpiece and the exhaust head. But, here and other places I've seen reference to a contraptions referred to as a "Duck Bill Eliminator"; while I understand what that means, I plead ignorance. Can one of you gurus point me to a thread or link where I might see a drawing, video, etc so I might have a clearer picture of what this thing looks like and how it works? TIA

Edit: I just found the file: Installing the DUCK BILL ELIMINATOR. I like it, thanks.
A sincere THANK YOU to all at VDH who make this wonderful resource available and to all the thoughtful contributors.

You can find it here.

I highly recommend them. If your Phoenix HPR DH doesn't have one, you should get one. 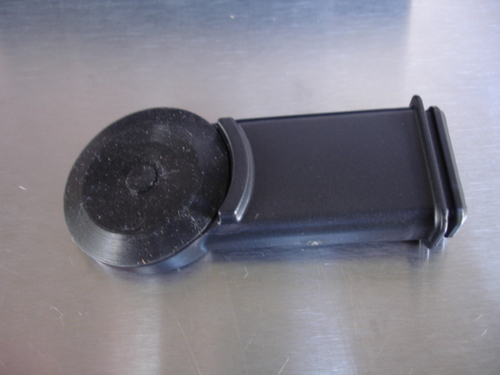