At https://en.wikipedia.org/wiki/Trade_literature, Wikipedia defines trade literature as "a general term including advertising, customer technical communications, and catalogues." We already have a thread going elsewhere about advertisements, so I thought we might start one focusing on diving equipment catalogues.

At Vintage Double Hose, Bryan has made available to us what I believe to be the largest collection of scanned diving catalogues in the world. There are other, smaller, collections such as:

* The Finnish Diving Museum catalogue page at http://www.sukellusmuseo.fi/esitteet.html
* Alfonso Gangemi's "Cataloghi" pages on his Historical Diving Equipment website at http://www.historicaldivingequipment.com
* The CG-45 collection of catalogues at http://www.cg-45.com/downloads
* My own modest collection at https://drive.google.com/drive/folders/ ... TEzQk1qUWc.

However, for me, Bryan's collection is the go-to place when researching the history of diving equipment. I wonder whether anybody has a favourite catalogue in this collection and what makes it your favourite?

I have recently been researching less commonly known European manufacturers of the late 1940s, 1950s and early 1960s. One that particularly caught my eye was Hurricane, a relatively short-lived but highly influential French spearfishing company that served the British recreational diving market until UK manufacturers of diving equipment such as E. T. Skinner/Typhoon began producing their own gear. In keeping with the ethos of the Bibliophile Forum, I intend here to concentrate on Hurricane's printed catalogues.

Here are the individual pages of the Hurricane 1947 catalogue, courtesy of the Mémoires de plongeurs website at http://memoiresdeplongeurs.free.fr/chasse2.html: 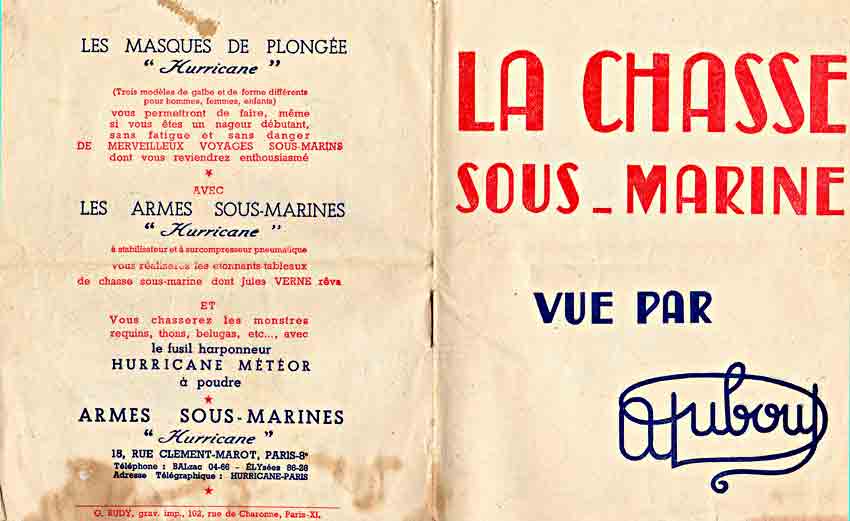 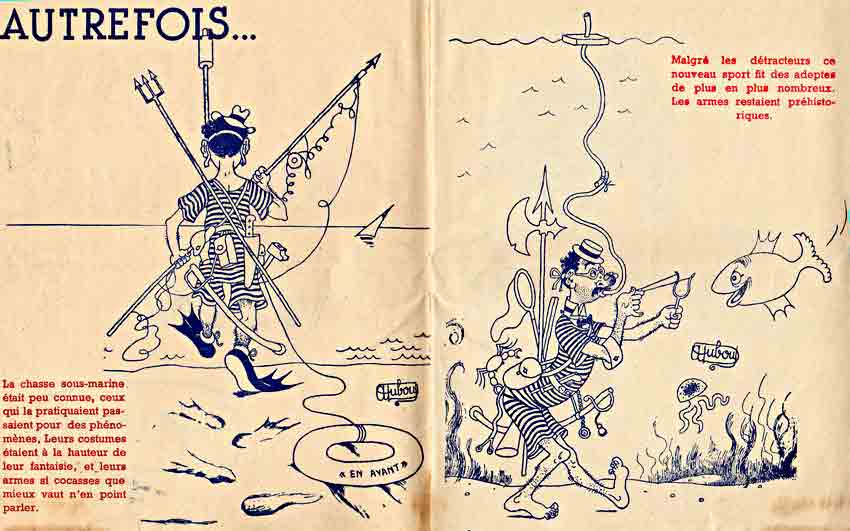 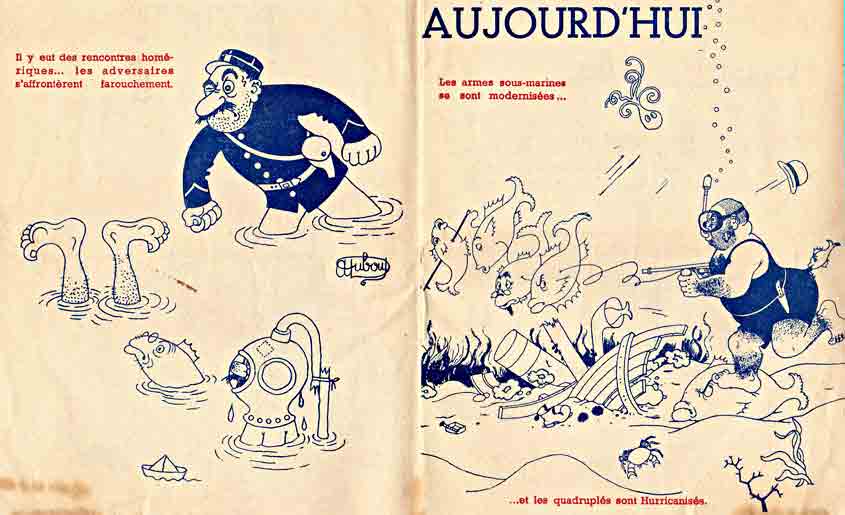 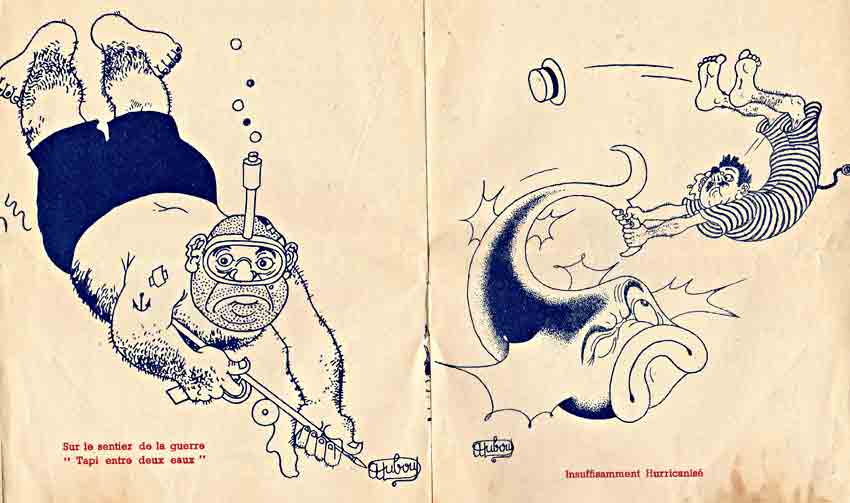 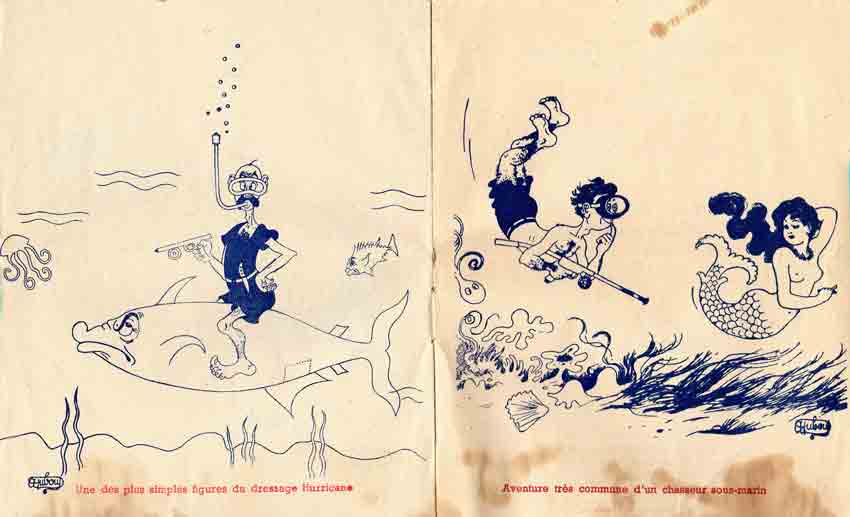 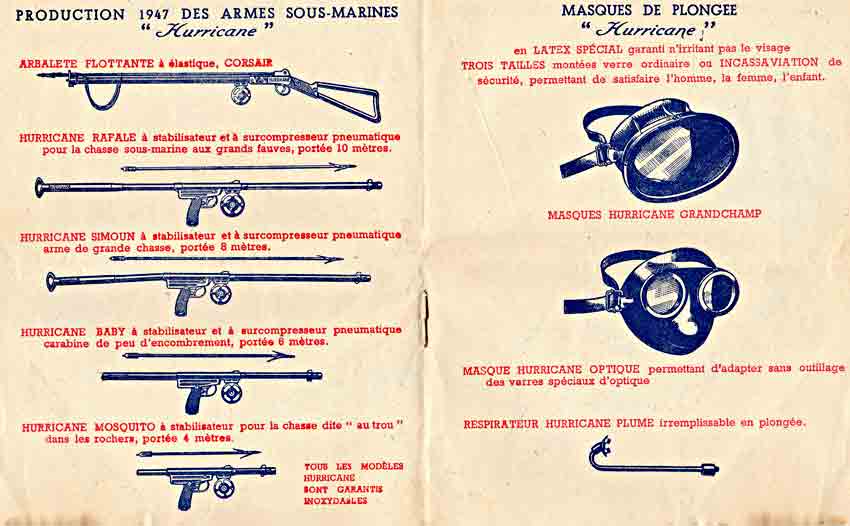 I find this booklet remarkable as it was produced only a couple of years after the close of World War II hostiliities. Its graphic designer was Albert Dubout, whose Wikipedia article can be found at https://en.wikipedia.org/wiki/Albert_Dubout. He illustrated many books by France's literary greats such as Boileau, Beaumarchais, Mérimée, Rabelais, Villon, Balzac, Racine, Voltaire and Rostand. In the Hurricane catalogue you can see his skill as a cartoonist with his wry view of underwater swimming, which would have been slowly returning to Mediterranean beaches in the aftermath of war. His illustrations suggest that he had a good knowledge of both pre- and post-war underwater activities and had the wit and the skill to turn his image of the sport into caricature. He is also a wizard with words and may have coined the French verb "Hurricaniser", meaning literally "to Hurricanise" and to be understood as "using Hurricane spearfishing gear". His caption "Insuffisamment Hurricanisé" (insufficiently Hurricanised) in the fourth image above is a classic! He was also responsible for numerous theatre and cinema posters.

In my next posting I'll showcase the Hurricane catalogue of the 1950s, in which Dubout also had a hand. I hope this brief introduction to an unusual piece of early trade literature has been of some interest.

Bryan wrote:I think an injection of cartoon humor in the dive industry today is long overdue

Too right, Bryan. Just to start us off, here's a cartoon from a 1956 issue of the Royal Naval Diving Magazine:
RoyalNavalJoke.jpg
Now back to Hurricane catalogues. Here are some pages from a later version, in all likelihood the 1950s: 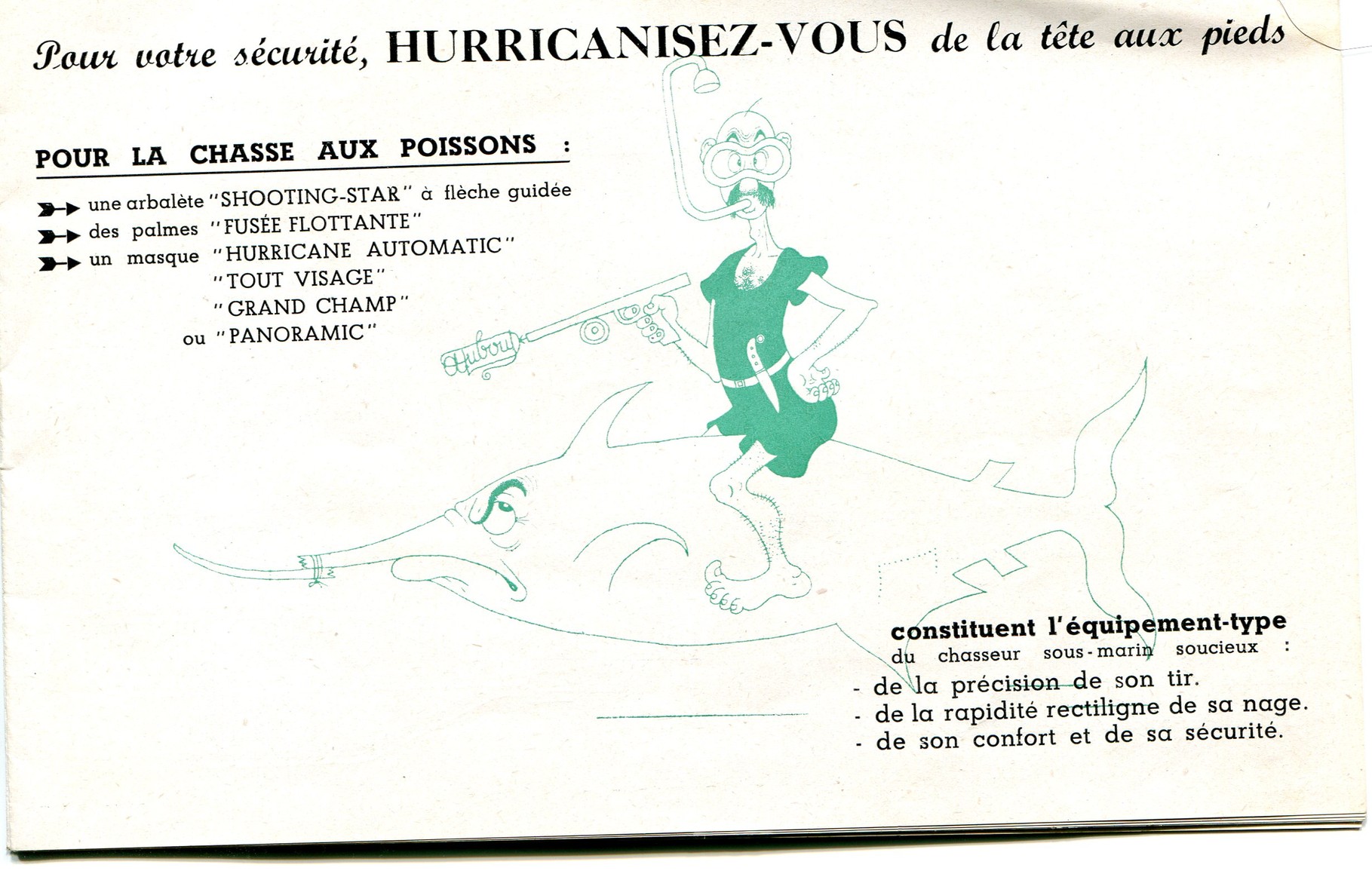 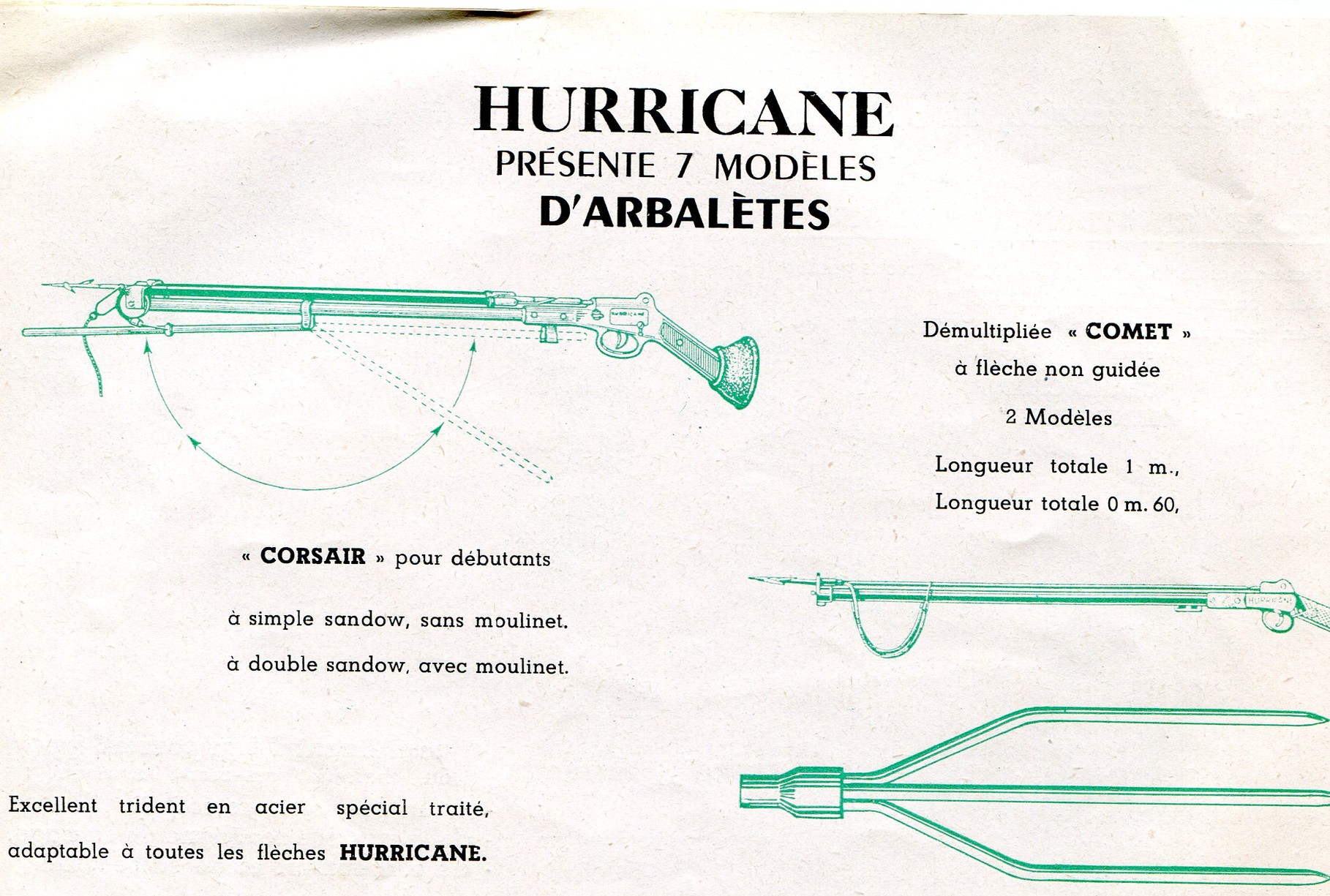 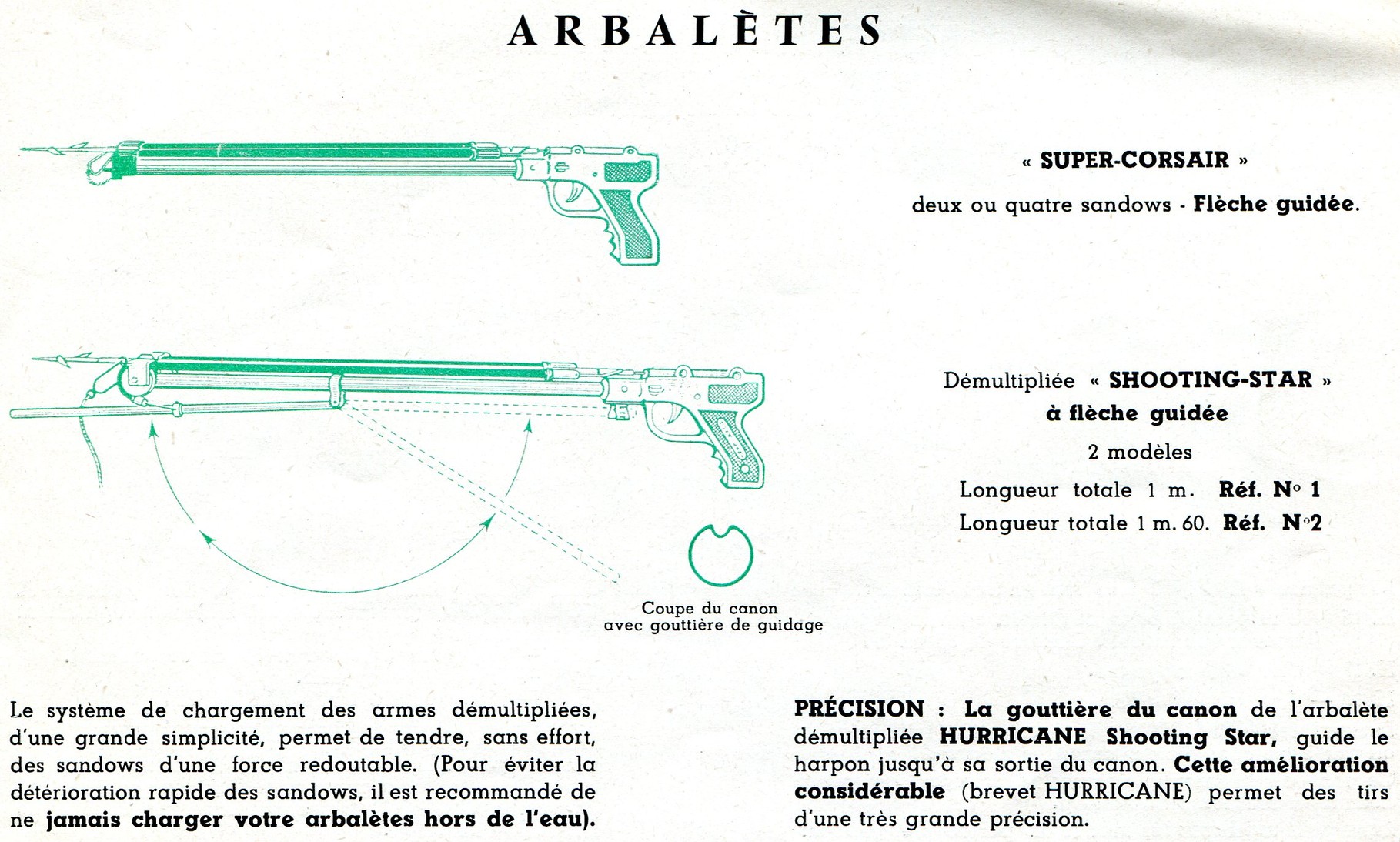 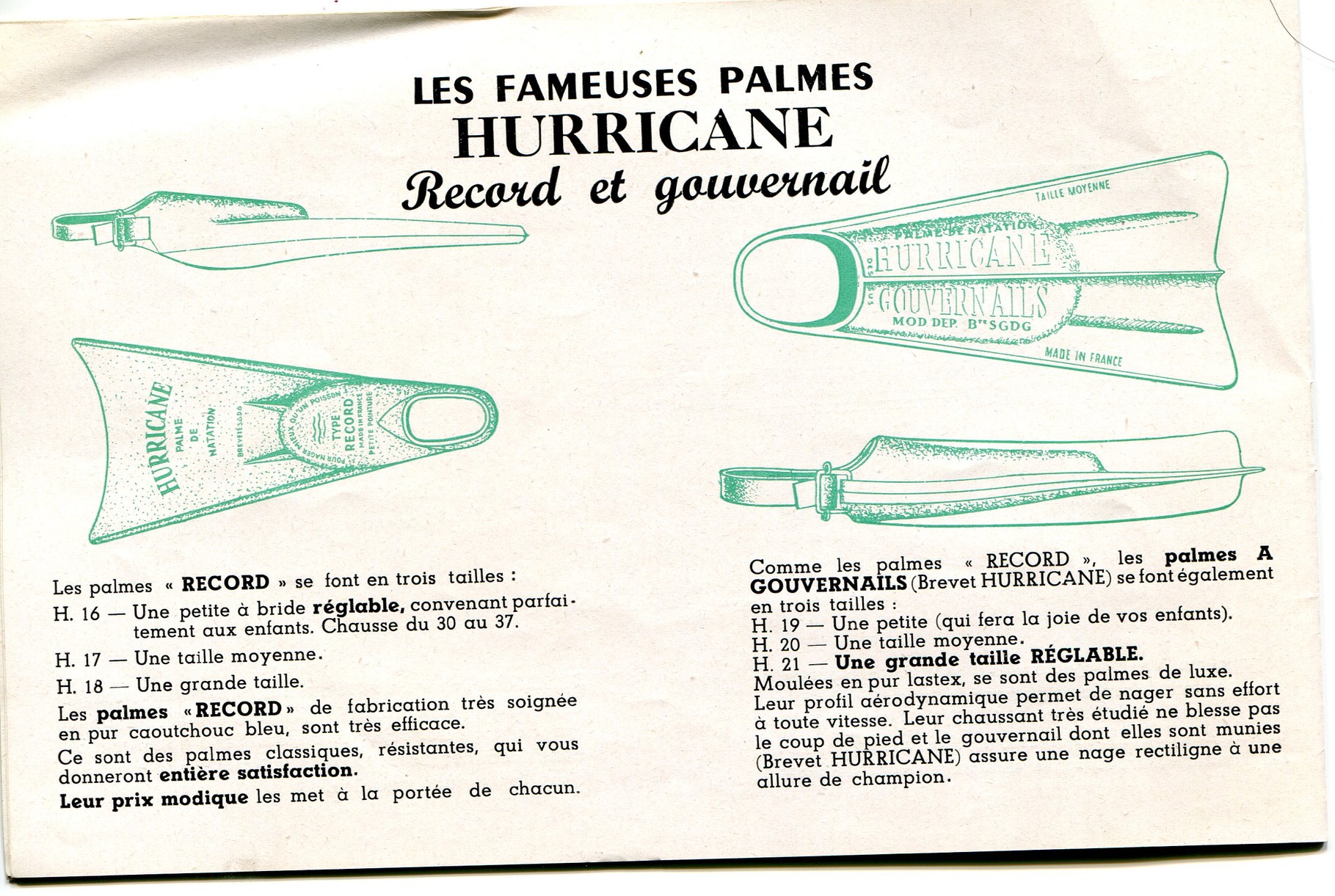 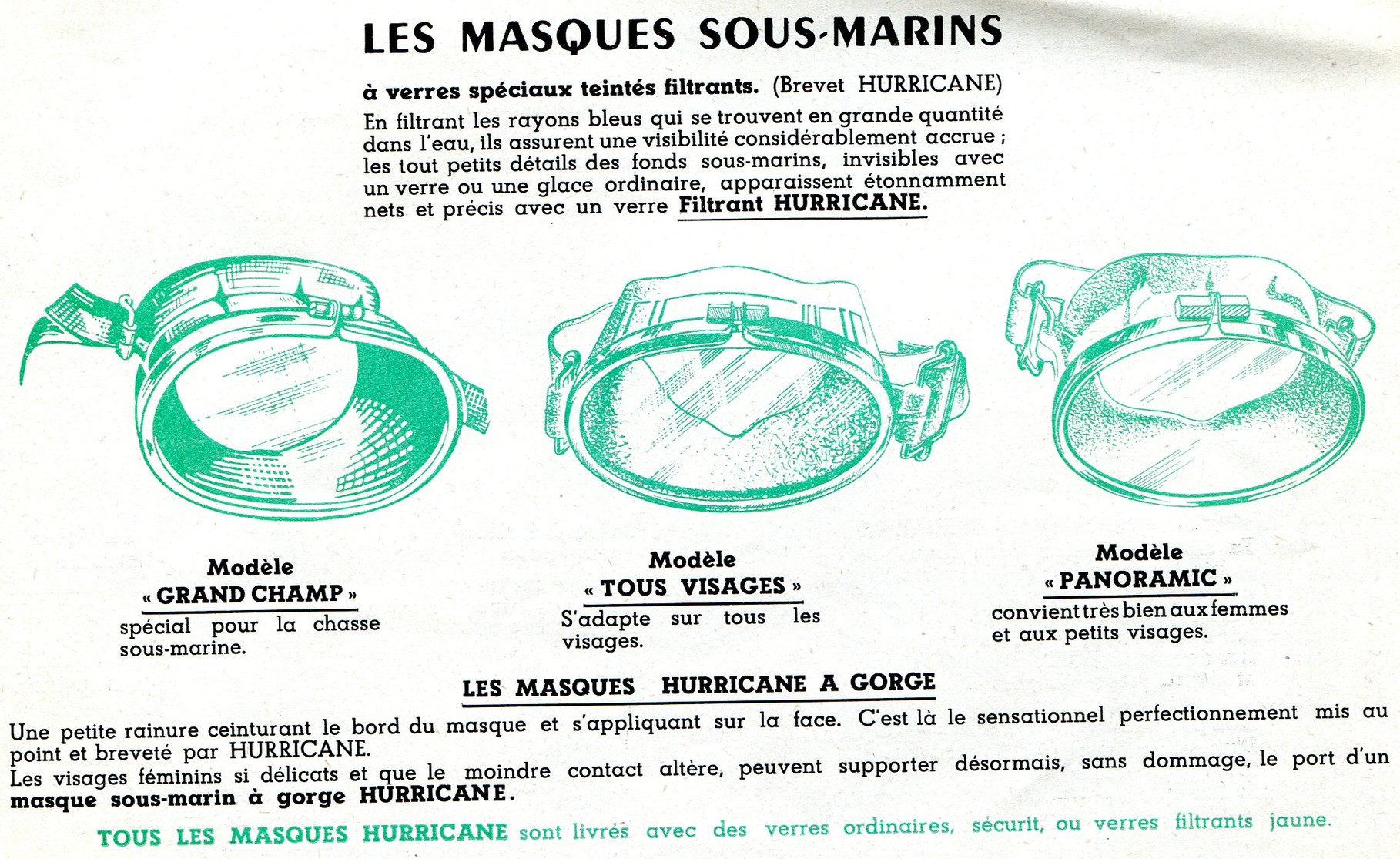 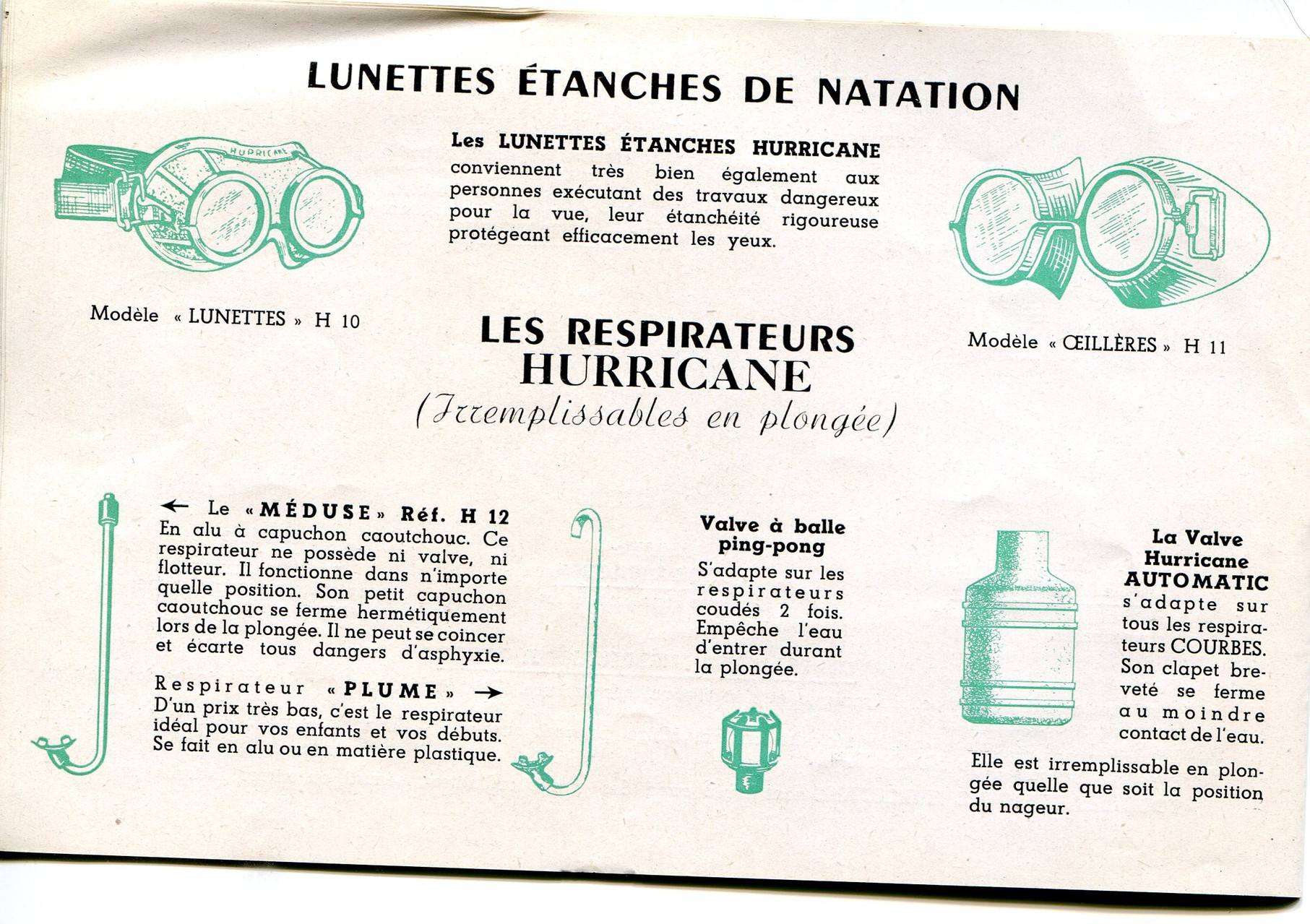 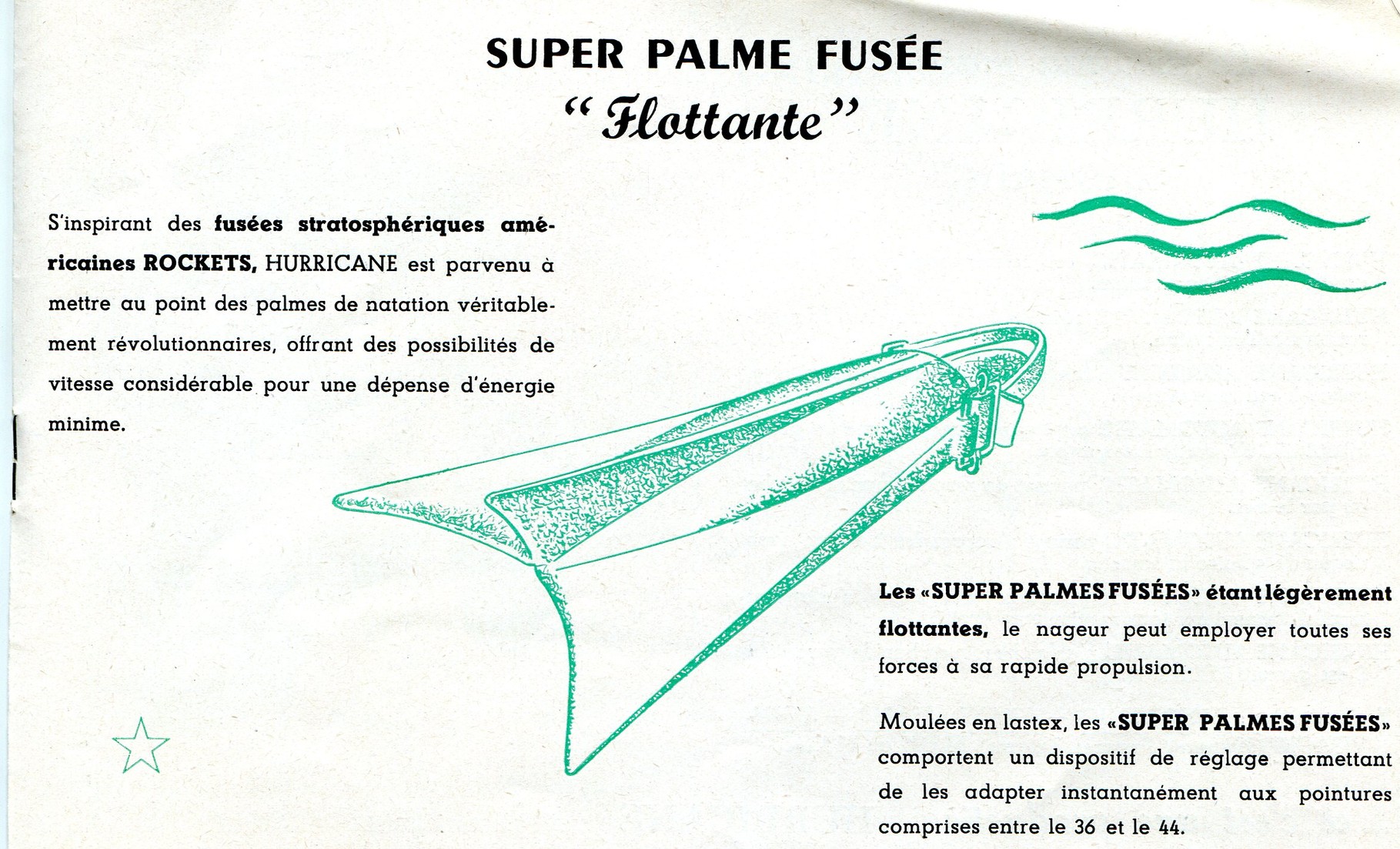 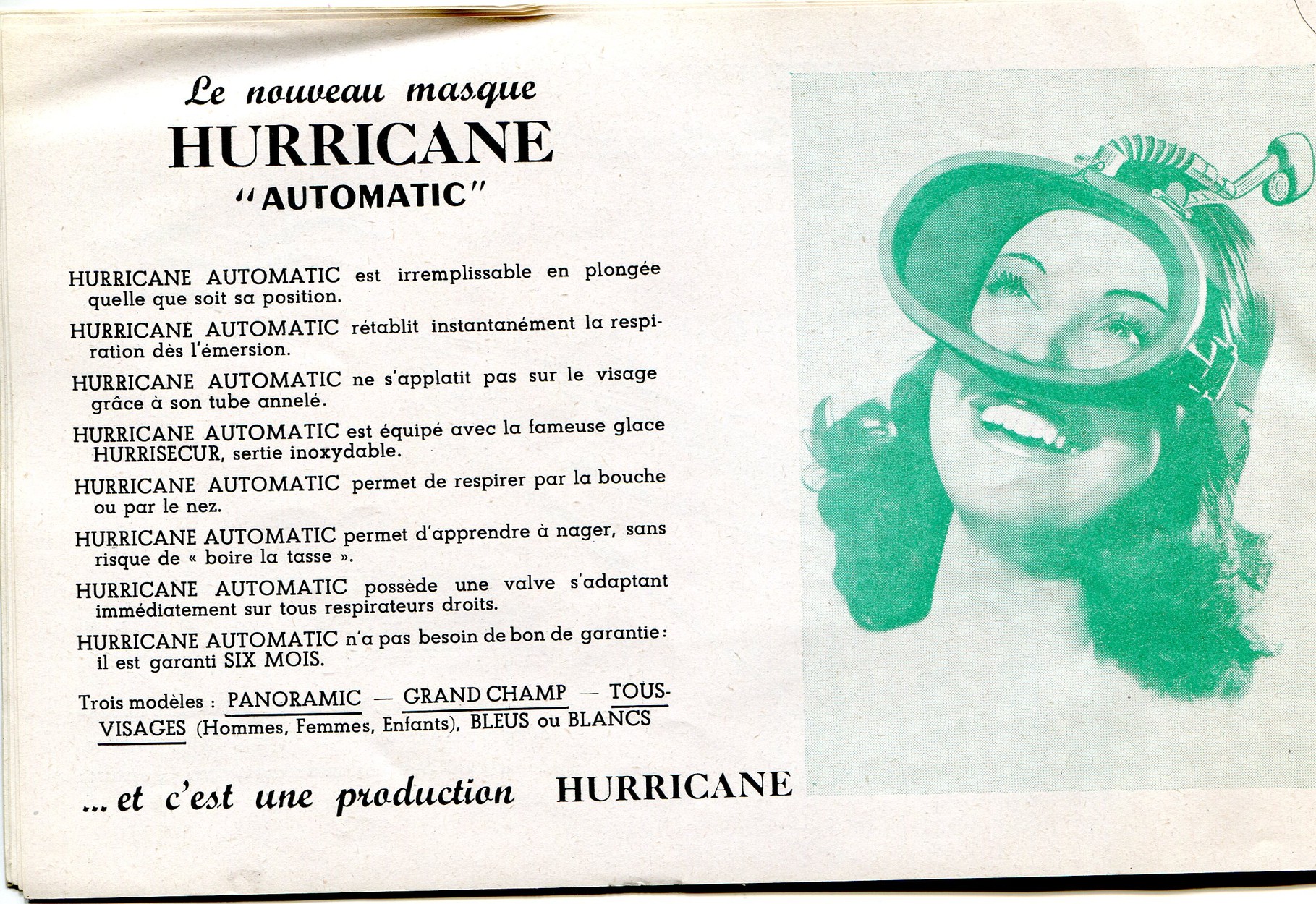 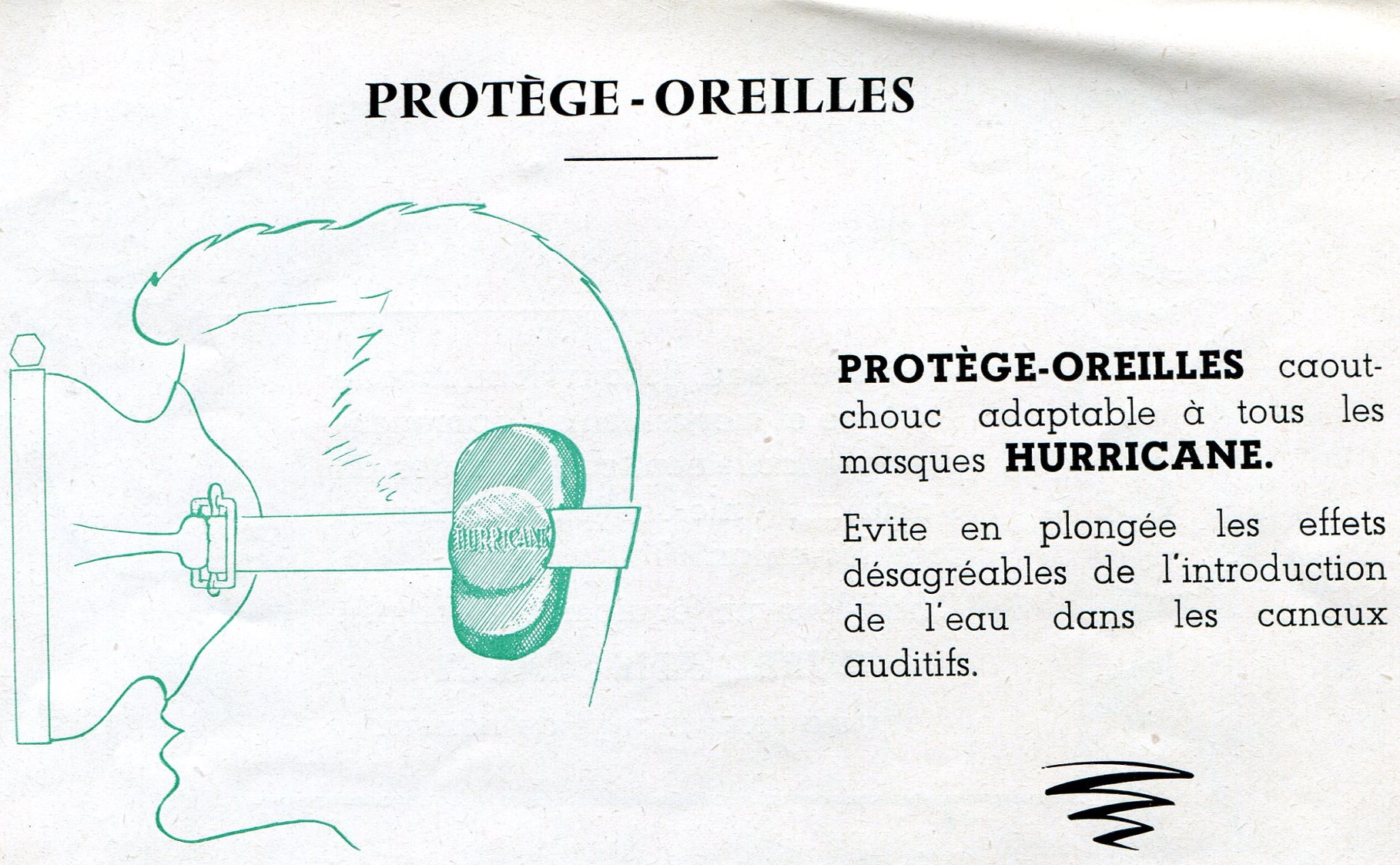 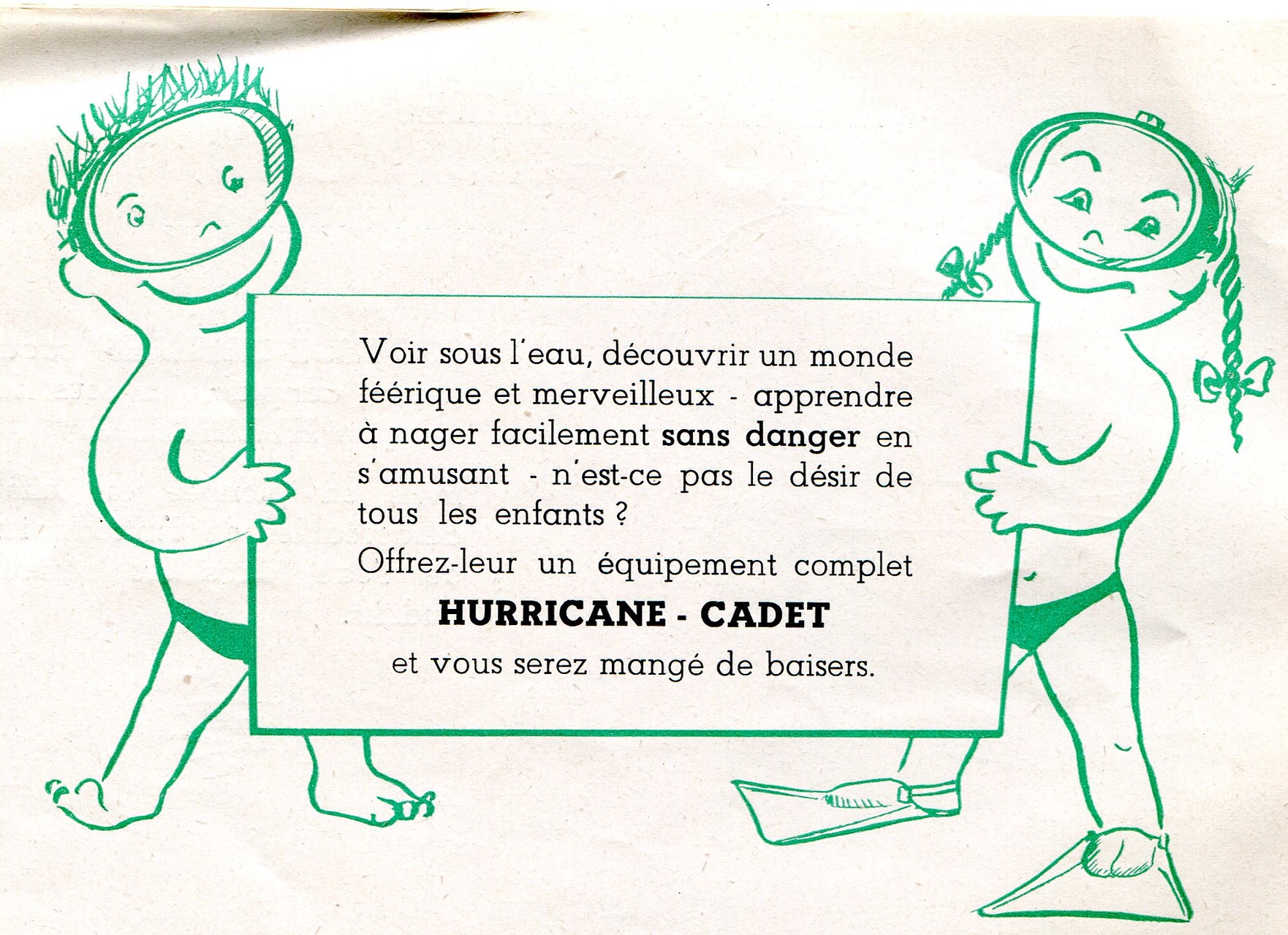 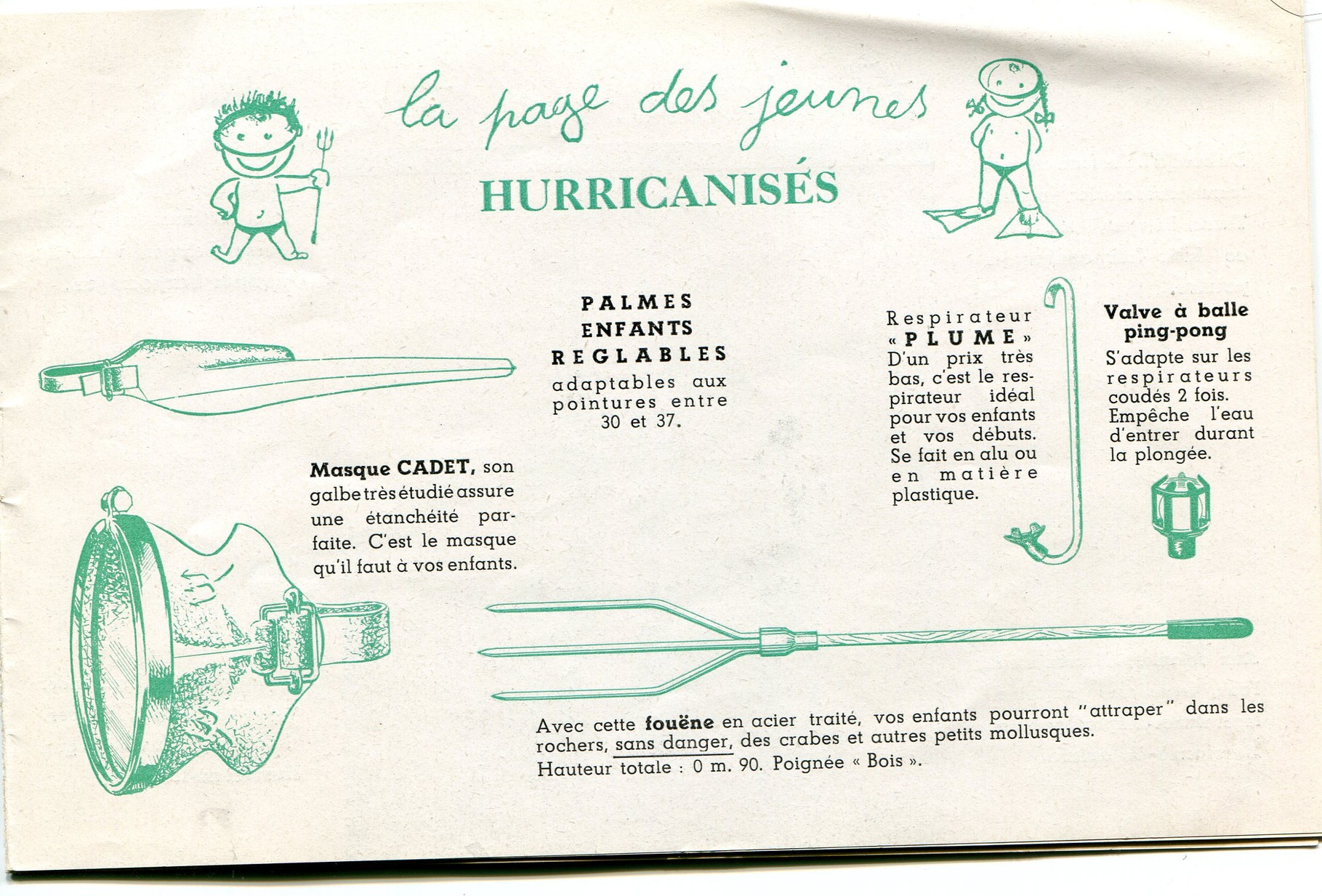 Dubout again has a hand in this design, combining gentle humour with genuine draughtsmanship. Once I complete my next catalogue reconstruction with the Dunlop Aquafort range, I plan to proceed to Hurricane with the same outcome for the Hurricane spearfishing gear company.
You do not have the required permissions to view the files attached to this post.

There are some really neat/cool looking fins advertised there. I can only use one pair at a time but I'll admit to hoarding old fins over the years. Thanks for sharing another great piece of history with us.
Doing it right should include some common sense, not just blindly following specs and instructions. .Gary D, AWAP on SB
Post Reply
4 posts • Page 1 of 1

Users browsing this forum: No registered users and 6 guests