Posted below is all the information that I have accumulated in my travels on all models of the Conshelf regulator. If anyone has any info to fill in the gaps, then feel free

The Conshelf XI had 1 3/8" HP, 2 3/8" LP. Its second stage has the 'magnum' exhaust valve, with a calypso style exhaust tee. It is easily identifiable because it still used a metal yoke screw. It was in the 1970-1971 USD catalogs. 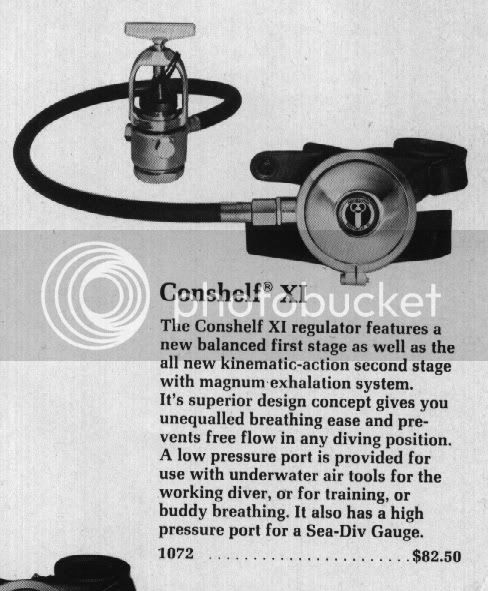 The Conshelf XIV has 1HP and 3 3/8" LP and the same second stage as the XII.
It looks identical to a late model XII except for the stickers. Pre-1998 models have 3/8" HP port, anything after has 7/16" (catalog verified).
Made 1977-1980ish (definitely in the 1980 catalog). This is sort of where the line gets drawn for vintage conshelf regulators.

These regulators are not vintage, but are included anyway for your edification.

The Conshelf 20 has the same conshelf XIV first stage, but a plastic second stage. The second stage is internally identical to the metal one in the XIV.

The Conshelf 22 is the same as the 21, but with a different second stage.

The Conshelf 14 has 4 LP, 1HP, and a retro looking metal second stage. It was, to my knowledge, the last Conshelf made. It, as far as I have heard, was called the "14" to fall under the USN ANU approval for the older "XIV" model.

That's all I know. I welcome additions. A sticky would be helpful too

Are you gathering photos? It would be nice to put a guide together similar to the ones we have for the double hose regulators.
Doing it right should include some common sense, not just blindly following specs and instructions. .Gary D, AWAP on SB

I am interested in the conshelf 30, which I cannot find anywhere, and the conshelf SEA. I would like information on configuration, pictures, numbers and sizes of ports, etc.
The impossible missions are the only ones which succeed. -JYC

Very nice work, Ron! The MR12 series, Scubapro MKV/109, and USD Conshelf regs are my favorite single hose models. I have always had trouble determining the differences in the Conshelf line, and your research will be a big help.

Great post
The SEA had the same 2nd stage as the SE2 but had the "T" style 1st stage.

It had one 1/2" LP and three 3/8" LP ports as well as two 7/16" HP ports. internally identical to all the others of course. I always kinda liked this first stage and used one for most of my instructor days coupled with various second sages at different times. It was also sold under the Spiro and Seaquest brands. I also had a Spiro branded one with DIN connection and a dry enviro seal although it had the absolutely horrible impulse plastic adjustable crappy 2nd and i got rid of it.
Interestingly i have a SE2 with the obnoxious 3 1/2" ports like the SE, so there was some variation in ports during model runs. it was my very first reg purchased when i did my open water.

Great reference for one of my all time favorite work horse regulators.
Certainly needed for the vintage world.
SDM

Thanks Kiwi! I have never seen one of the SEA regs in person, but it certainly seems useful. It would be a great spare to have in the garage. It is nice to know how all these first and second stages interact, as you can pretty much build a regulator that meets your needs. I like the conshelf 22 first stage in particular. It has enough ports to run a dry suit, and with a metal vintage second stage, it is a wonderful breathing and looking piece of kit.
The impossible missions are the only ones which succeed. -JYC

This is great that you have put this together.
If you look at the various Conshelf repair kits in the VDH store, there are a couple of other models that they list; SEA2, SEA4, Pro Diver, and Select.
I am assuming that they are additional models of the Conshelf.

All the SEA (2,4)first stage models were essentially the same with some detail changes biggest being a change on the balance chamber plug going from a slot to a hex key. and the first stage kits are the same as all the other conshelfs but it will have a couple of extra o rings and from memory a different filter.
The pro diver was just a conshelf with angled ports really heavy and solid.
don't remember much else about it only recall ever servicing one.

the select again from memory was the same first as the SE3 or SE2 maybe but the second stage had big soft rubber front cover, again my memory fails me to what they were inside but i suspect they were the same as the SE2 with a different cover, they were really ugly

I feel a bit embarrassed that the bulk of my knowledge is from the dodgy 80s when USD put out some of their worst products.

Don't feel bad! Someday guys my age are going to be rebuilding 80's regulators talking about how the vintage vintage guys are crackpots and modern gear is crap. So it goes.
The impossible missions are the only ones which succeed. -JYC

These also may not be vintage, but after taking another look at the repair kits, they list three more models; the Aquarius, the Pioneer, and the Sea Quest XR. Are these additional models of the Conshelf or just other USD regulators that use similar parts?

Here's a photo of my very first reg which I eventually sold:

I also dig the Conshelfs. I have all of them I think. I also have the Aquarius which the whole first stage is a solid hunk of brass. The yoke is not removeable as it is all one piece and you can use it like a hammer. I am not sure if it is considered a Conshelf but I would say that internally it would be. I just picked up a NOS Aquarius in the box the other day in a thrift store. I don't think I ever heard of a Pioneer before.

The vintage Aquarius is a non-balanced piston regulator. The Conshelf is a balanced diaphragm regulator. They don't share any parts (in the first stage).

The Aquarius had a great simple first stage, but it is a very different design as the Conshelf.


It is interesting all the different body designs they have managed to put Conshelf first stage guts into. Even today's Titan and Legend could be considered part of the Conshelf family (not by name, but by sharing the same diaphragm first stage design).
Luis

Very interesting thread Ron. I have a little I can add. The Royal that Ed posted above came in 2 versions, a Royal Aqua-Lung and the Royal Aqua-Lung Supreme (silicone fluid filled enviro seal). The second stage was a somewhat complicated balanced second stage, I have not seen any other USD/AL like it. I have one of the seconds (in pieces, came that way and it is in my very deep round-2-it pile). I have the service manual and parts breakdown for both stages of the Royal.

I also have one of the SEAs that I used for a pool and travel reg for a while. It does use the same service parts a the Conshelf other than a couple of different Orings and the filter is a cone shape. Although it's heavy, I liked it as a travel reg because it is so easy to get to the main components. One allan screw and the balance chamber and HP seat drop out for easy service. I have the service manual for the SEA as well if anyone wants it.
Herman
Post Reply
52 posts