Come and join us vintage divers August 2-4, 2018 at Fortune Pond, Michigan. I should be there in the later afternoon on August 2nd while most others will arrive on Friday and Saturday August 3rd and 4th.

We plan on arriving late Thursday afternoon as well.
Looking forward to diving and being in the UP.
Pray for good weather.
Brian

Great to hear Brian. I hope to get a dive in with you on the 2nd...

Jill and I will be arriving around noon on Friday. We plan to get in 2 dives Friday and 2 dives Saturday... In the Crystal clear waters of Fortune Pond! I'll be bringing my UV26 scooter and can't wait to show Jill a flying tour of the underwater cliffs.

I love diving my Twin 38s so much... They are so comfortable to wear, position my double hose regulators so well, and are so light weight. But hauling all four sets on a dive trip is a challenge. I remember when I had just the one yellow set, I used to bring high pressure single tanks and just cascade re-fill my Twin 38s for subsequent dives. I'm going to try that again... So now I have to choose which set of Twin 38s to bring!

frogman63 wrote: ↑
Tue Jul 24, 2018 8:48 pm
We plan on arriving late Thursday afternoon as well.
Looking forward to diving and being in the UP.
Pray for good weather.
Brian

What time do you thing you'll get to Fortune Thursday Brian?

I will be loaded with tanks again. I will have both sets of UDS-1 triples along. I will have the ABS triples along. The triples will make the trip along with 2 sets of doubles and 4 aluminum 80's. A friend of mine who has never been to Fortune is going to meet us there Friday and then dive again Saturday. I will have my compressor and generator along too so warm chili will be lunch on Friday.

We are currently crossing over lake michigan on the ss badger. Should arrive around 4:00 pm in the iron river area. Perhaps we can meet for dinner. We are staying at the americinn.
Brian 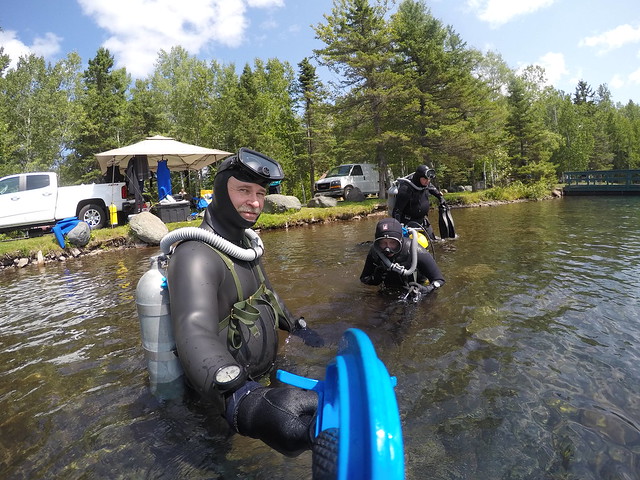 Brian, Eben and I by Scuba Diver, on Flickr

Brian with his Kraken 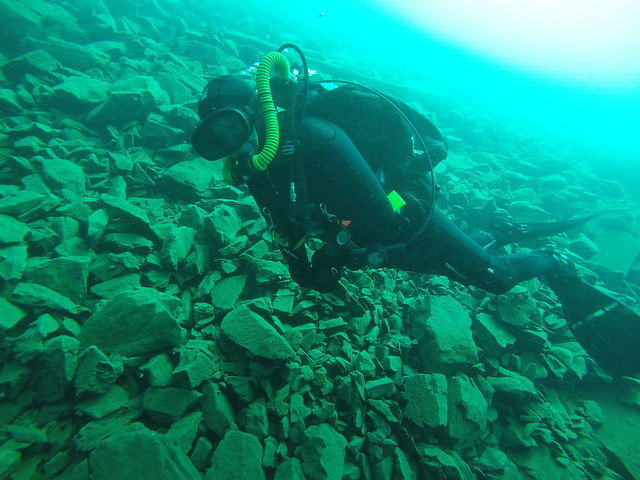 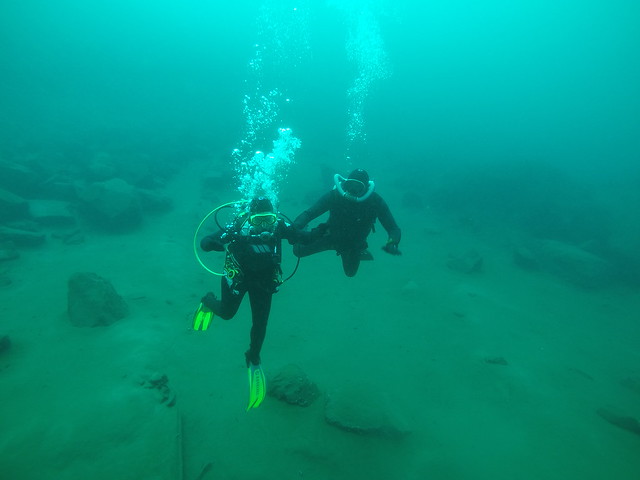 Diver Don with his US Divers ABS triple tank system and his student with vintage US Divers tank. 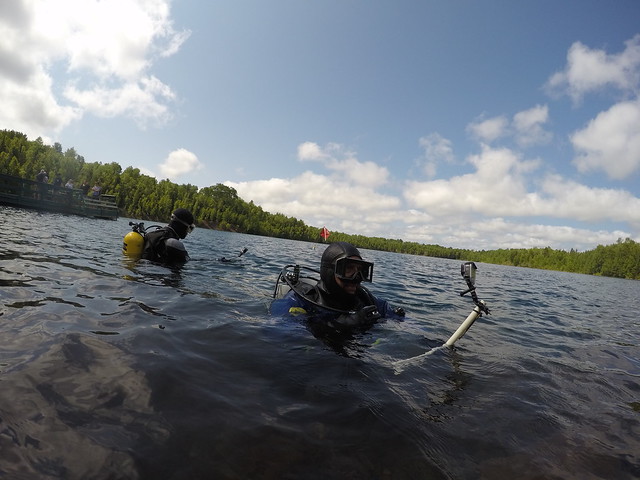 Diver Don and buddy by Scuba Diver, on Flickr

My smaller US Divers tanks with my Phoenix 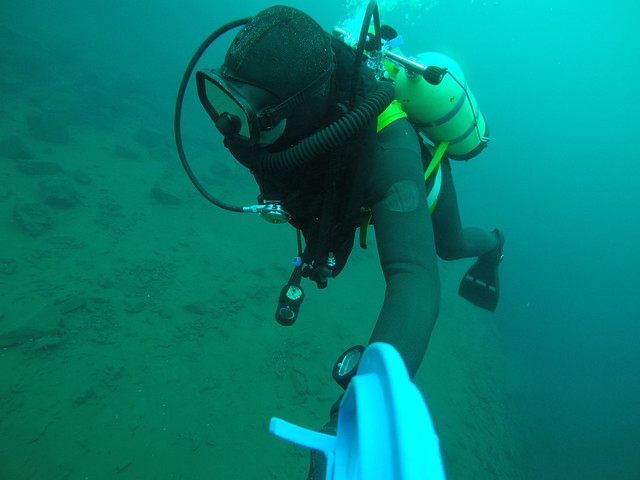 Using my Twin us divers tanks with my Phoenix by Scuba Diver, on Flickr 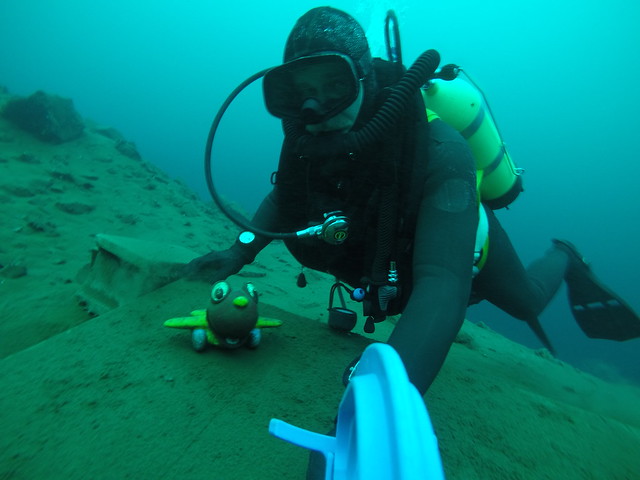 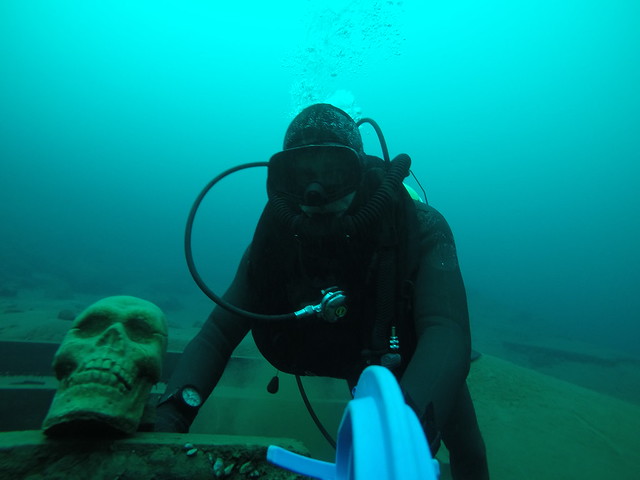 - Pretty slick twin tanks all around... If I do say so myself!

- I gotta say we really appreciate Brian Frogman63 and Janet traveling all the way over to dive with us at Fortune. What a great couple of friends that we first met at Sea Hunt Forever. After diving with Brian these two days, I have to say he is a super well put together diver. All of his equipment is attached and positioned in a well thought out and efficient manner. Underwater he is downright graceful! Above water, he is a Sea Hunt Mike Nelson NUT. As I was leaving the parking lot, he stopped me and said, "Stay tuned for the next episode of Sea Hunt!"

- Also many thanks to Ron Sheriffdiver! Ron got to Fortune a day early and early each morning, too. He set up his Awning and Chile cooker, filled tanks, brought just about every piece of dive gear he owns, and dove at least 4 times a day! He is a super enthusiastic and super generous Vintage diving MACHINE! Thanks for all you do to make these dives great!

- We had a pretty good turnout: Diver Don made it over for Friday and brought a friend named "Bram". My wife Jill came with me. Brian and Janet. SwimJim came with his wife ViAnn. And Rons friends Jory and Jess came for Friday and Saturday. That's 11 of us.
- Lots of good vintage equipment and other items of interest. DiverDon brought his recently acquired Bauer Purus compressor for show and tell... Very cool. SwimJim brought a new old Voit Trieste and Divair and dove them both. Of course Ron had UDS-1s and other stuff. DiverDon brought and dove an ABS Triple set. Ah but I digress... It really was a great trip in both the diving and friendly conversations.
- Next Trip is mid to late September. Dates to be announced. As Brian says, "Stay Tuned for our Next Sea Hunt adventure!"

Note: Photos by Jill... Thanks Babe!
SurfLung
The Freedom and Simplicity of Vintage Equipment and
Vintage Diving Technique are Why I Got Back Into Diving.

It was a fun weekend. I haven't dove with my friend Jory for years. Last time I dove with him it was in Cozumel. He was amazed with our vintage gear and how clear the water was. Brian got used to the cold water very fast and it looked like he had a good time. I even got to use Eben's scooter which was cool and I was very careful not to scratch it bringing it back to shore!!

I dove a bunch of different wet suits during the weekend. It even paid off that I brought along spare parts because Jory's dive computer battery died and I had a spare one along and even the correct tool to open the back cover. Boom, computer fixed. Jory is a super energetic person and I think he will come back and dive again soon. Maybe this will get my other friend Steve to come and dive with us now..

I pumped up tanks for Don, Jory and Don's friend during dives. Wish I could have dove with Don but my surface interval was too short at the time. SwimJim dove his scooter all the way around again.

Thanks again to everyone for a great time and thanks for sharing the pics.
Just to be complete in the description, the theme dive on Friday afternoon, not only had to include shorty doubles, a 50 Fathom Voit reg, and a Pacifica mask, but the harness had to be the old Navy style (i.e. Mike Nelson).
Did somebody say 38 deg F?
Take care,
Brian

For those of you who've never been to Fortune Pond, here's a video getting towed behind Surflung's scooter showing the steep cliffs.

HI,
I'm glad everyone had a great time with fantastic vis.
Brian your good man for driving all the way to Fortune.
I'm out of the water for 2 weeks,
Mike Nelson's Grandson Dr.Eric Nelson (Also A diver) did suregry on my eyelids Thursday,no I wasn't cockeyed just squinty.
Post Reply
13 posts • Page 1 of 1