The #18 wing has sold really well....THANK YOU.....But I had a lot of requests for larger ones so I contracted with the same manufacture to make them in #23 and #30 lift. So watch for an amazing deal during the holiday sale....I'll have combinations of wing, plate, harness starting at $300.00 with free shipping and everything but the hardware is made in the USA!
Doing it right should include some common sense, not just blindly following specs and instructions. .Gary D, AWAP on SB

Any chance that they will make a wing for doubles?

If you want to make the best packs, use the best materials. CORDURA® is a cornerstone fabric for us, look for the official hang tag and label on products using this fabric. CORDURA® Classic fabric provides rugged, durable performance for a variety of end uses, including packs, luggage, and footwear. Products made with CORDURA® Classic fabrics feature enhanced tear and abrasion resistance, and long-lasting durability. CORDURA® Classic fabric is constructed with qualifying yarns which are woven in accordance with INVISTA's approved fabric standards for the CORDURA® brand. All of our nylon fabrics are finished with a DWR (Durable Water Repellency) on the face to further enhance the function and quality of the finished products. On the backside, a PU coating is also used to enhance the stability of the fabric.

Thanks for offering these wings at such an outstanding price. Having seen them in Cozumel I was impressed. I said then I would get MC an 18 but I am not sure I let on that I was smitten with the idea of a 23.

So, I got one of those too. Why, well, I have an Oxy 18 and 30 Mach Vs but summer before last, I went out with one of the only ops there in the Keys who will do a drift on Molasses Deep. I did this dive solo and to make the op happy I had to have a pony with reg and a light. The only light I had was a can light so on that went. And of course my camera. Then this op, like several down there, has steel tanks. So add that. Then consider the water was like 86 degrees so I dove in a rash guard and boardies and I have very little natural flotation (working on that). So, to make it short, the 18 pound wing was huffing and puffing to keep me up while I waited on pick up. In fact I plummeted down, managed to kinda swim around and then clawed my way up. And I had no weight on, none, zip, nada, so anyways, I figure a 23 is just right for solo configuration. Just enough extra capacity to handle odd situations and still be very minimal in profile.

For buddy dive configurations, with maybe a little neoprene and/or aluminum tank, the 18 is where it is, they are just right. But for little exposure protection and a steel tank and some other equipment added then an 18 can be a might slim sometimes.

So anyways, thanks for the good deals on wings and for bringing in a few 23s.

I was wondering about the 18 for that very reason, Most of the time 18 would be perfect but I sometime end up carrying a bit more than I planned and often dive with n old school canister light when artifact hunting. A 23 might just be the ticket.

I have the XS scuba 30LB wing that was being sold with the plate a few years ago. I modified it for use with a set of mini doubles. I have been on the lookout for a wing with a smaller profile at the top. This looks like it will work. I just need to see if holes line up.

The XS Scuba #30 is a great wing and unless you have worn it out I would keep it. They are tough as hell and use standard fittings so it should be good to go for years.

On the #23 and #30 Argonaut wings I asked that the lower slots be made longer so it would have more position options. Adding a grommet to them is easy and can be done at home.
Doing it right should include some common sense, not just blindly following specs and instructions. .Gary D, AWAP on SB 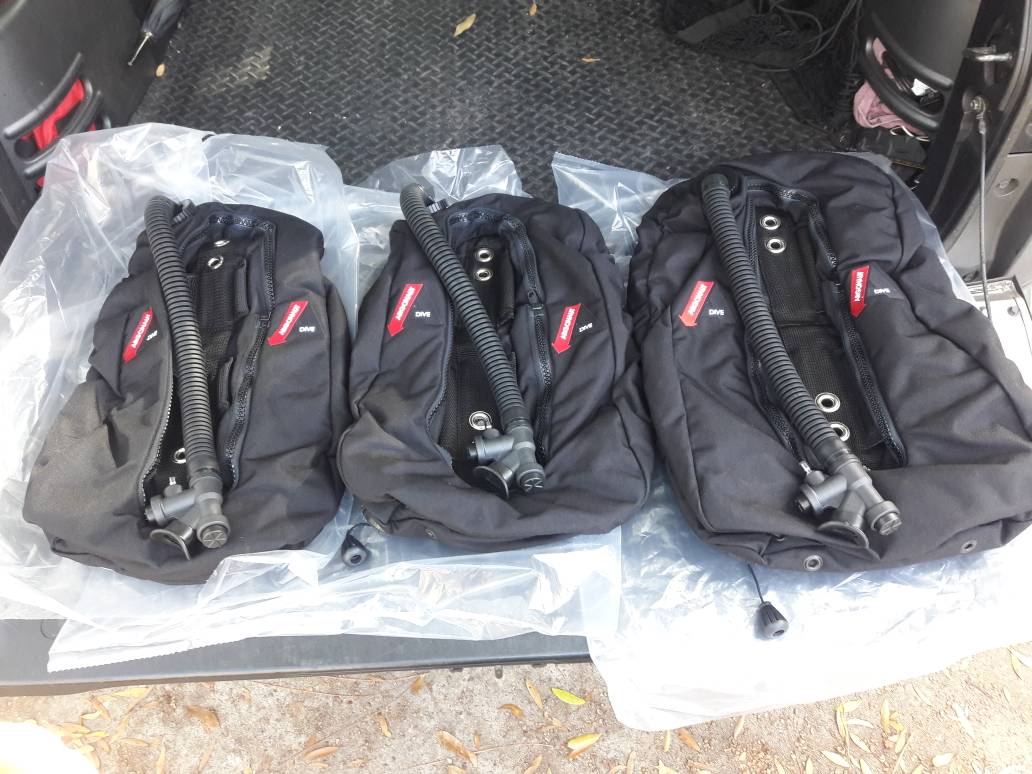 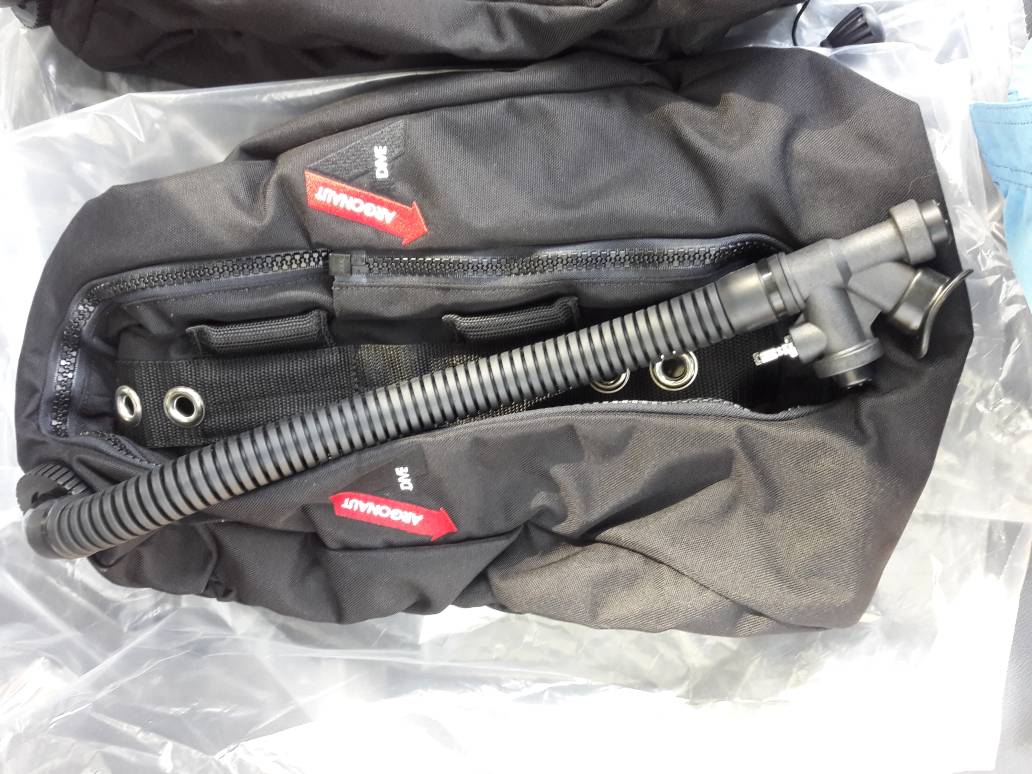 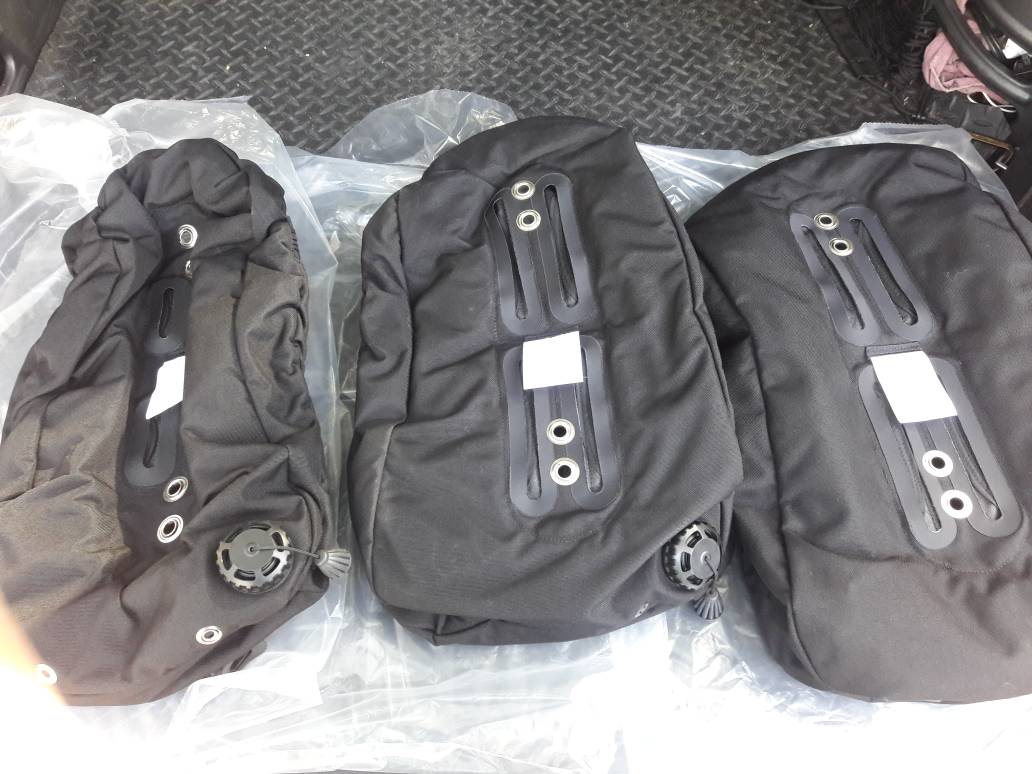 Just for a reference rigged weight for the 23 pound lift wing and plate, 7 pounds and 6 ounces as follows:

Thanks to the internal bungee the wing presents nearly as small as my Oxy 18. Pretty dang light for a ready to go travel rig with a little extra capacity vs my usual Oxy 18 pound wing.

Liking the lengthened slots, nice improvement Bryan! A certain PITA should be shown that.....

Anyhow, seeing Christmas is here, and the family gift is Curacao over Easter, do I get the wife a small wing? She is diving a 30# and is quite short. I love my 18#, and think 23 would fit her well. I think those lengthened cam slots will now fit her DSS plate....
Bob

rhwestfall wrote:Liking the lengthened slots, nice improvement Bryan! A certain PITA should be shown that.....

Anyhow, seeing Christmas is here, and the family gift is Curacao over Easter, do I get the wife a small wing? She is diving a 30# and is quite short. I love my 18#, and think 23 would fit her well. I think those lengthened cam slots will now fit her DSS plate....

After selling quite a few #18 wings I've yet to come across anyone who had fitment issues with the slots on it....But I'm no SB expert

Due to the perimeter bungee the #23 is only slightly larger than the #18 and weighs just a little over a pound. It should pack and travel very nicely.
Doing it right should include some common sense, not just blindly following specs and instructions. .Gary D, AWAP on SB
Post Reply
11 posts • Page 1 of 1