Forum rules
Discussion of diving methods and equipment available prior to the development of BCDs beyond the horse collar. This forum is dedicated to the pre-1970 diving.
Post Reply
26 posts

Well I didn't mean the pin would be really complicated, just more than the body. And at that, you're right. It isn't really. Cutting the angle of the contact seat is probably the most complex procedure. And that wouldn't be very complicated..... I hope Herman does take this on. He's the real machinist.

Speaking of machining, I just got some Delrin stock today to make Voit Titan II/Trieste LP valve bodies. This is for converting a Titan II into a double hose reg. I know I am way behind several others who have already done this, but I am a recent student of machine work. I have already made a blank, and I am in love. This stuff is easy to machine, and is pretty inexpensive, compared to brass. It is very robust and will be perfect for my project. I think the stuff would be perfect for a DivAir plunger!
Phil

I enjoy working in delrin as well, really machines well. That said, I don't think it is the choice for a seat. Delrin is very hard and does not compress or flex which makes it great for parts like gears and structural parts but not for parts that need to mold to it's mating part. Soft seats, which the HW and Divair seats are, need some amount of flex to conform to the hard seat. Nylon is a much better choice for a seat since it is a softer material that will to some extent mold to it's mating part as opposed to say Teflon which is much softer . It would not stand up to the spring and air pressure causing it to excessively crush. I have some nylon stock but not sure the size, I will dig around in my materials bin today and see what I can find.

FYI, the threads on the Voit second stages is 5/8-24. It's hard to determine since there are so few of them and there are 2 close standards 5/8-27 and 5/8-28. It took me a good bit of time to finally get them determined under high magnification. Here is the die you will need https://drillsandcutters.com/5-8-24-x-1 ... e-special/
Herman

I finally got a chance to dig around, find some stuff and do some testing. I found a HW single hose reg that uses the same HP seats, both hard and soft that the DH regs use. It is much easier to tinker with and allows me to check and adjust IP as opposed to a DH which will not allow me to do any monitoring of the IP.

First off, does anyone have any experience with the HW single hose regs that use this seat? What I am interested in is how they "normally" perform, I would hate to be chasing a huge increase in performance over what is normal, at least at first. More on this later.

I checked the HP seat that was in the reg, it would not hold IP, then I replaced the seat with a NOS seat I had, it was a little better but not much. I found the hard seat was not well machined and had a lot of machining grooves in it. This was part of the unstable IP, I polished the seat to remove the grooves which helped, the NOS one I have has the same grooves so I suspect these seats were never close to performing the way we expect of a modern reg to seal. Next the IP was not real stable, it jumped around a lot and was difficult to set with the adjustment screw. I suspected the diaphragm had gotten hard and was contributing to the problems. I took it apart and replaced the rubber with a USD diaphragm. The replacement is easy and it helped stabilize the IP a good bit.

With that done, I moved to making a replacement seat. I had a piece of 1/2 nylon rod that I used. The angle on the seat face turned out to be 45 deg which is pretty easy to duplicate. I turned the stock down to the correct diameter to fit in the reg, cut the 45 angle on the end, drilled a small hole and inserted a short piece of SS pin. The piece was cut off, turned around in the lathe, and bored for the spring. To increase the flow area around the seat, I sanded flats on 4 sides, basically the same way a Mistral seat is made.

With the seat made, I moved to testing it. It seems to work a good bit better than the NOS OEM ones but it still does not lock up well. With the IP set to 120 and tank pressure around 2500, it locks up but creeps up another 15 psi over a minute of so then appears to stop. This is at higher tank pressures. At around 500 psi I can not get it to stabilize, the IP locks up but then continues to creep up until the second stage opens. I am wondering if this is "normal" for this type of seat. While not ideal and no where close to acceptable by modern standards, it would work OK. Going back to my earlier question, does anyone have any experience with these regs from back in the day? Is it "normal" for the IP to be unstable at low tank pressures?

Bottom line on what I have so far. It is fairly easy to reproduce these type seats but I need a better understanding of how well they can be expected to work. A slightly different material that is a bit softer may work better. The material I am using appears to be roughly the same hardness as the OEM seats.

I am not/will not be making them for use, this is just an exercise in "can I make them" for my own interest but thought some of you might be interested in what I have found out.
Herman

Herman, Good to hear from you about your experiment with the seats. Are there differing grades of nylon hardness, or other materials you know of that might be slightly softer (but harder than Teflon) and more likely to seal?

After reading your post I had a thought about making a brass poppet body, then making a small bore in it slightly larger than the brass seat orifice. I would insert something softer than nylon to act as the cone shaped seat tip. It would also have the SS pin embedded in the center. Being somewhat supported by the surrounding brass poppet body might keep something like Teflon from distorting, for a while at least, and might result in a better seal.

I still have one of the old Healthways adjustable first stages like you referenced, and may experiment with it (some day!) as you mentioned. I'm finding it hard to get around to all those little projects I would like to do. The whole rebuild of the Divair is pretty far down the list right now, but I'm still interested in getting it going.
The older I get the better I was.

After leaving the seat pressurized for a couple of days it seats a lot better. It will lock up then drift up 5 psi then stabilize so it's usable. It also now locks up at 500 psi which it did not originally do. It appears it needed time to take a set. The IP shift over tank pressure is a bit more than I expected. It shifts over 20 psi over a tank pressure span of 500-2500 psi. After thinking about the forces on the seat, it makes sense.

As for a softer nylon, that may be a possibility but with some breaking in, the one I have seems to work OK. Besides being more complex to make, the issue you are going to have with a 2 piece poppet is getting the soft material to seal - not leak around it. It will have to be bonded some how into the brass piece, otherwise it will leak around the outer dimension, behind the seal and back out around the IP side. IMO it would be more trouble than it's worth....now using a solid brass plunger and machining the insert piece out of nylon might be an option worth looking into.
Herman

Good to hear that the seat sealed better with time. My scheme about the brass carrier would have likely been too complicated for me, and I have a much better chance at resurfacing an old one or even making one from nylon as you did. Thanks for taking an interest in it.
The older I get the better I was. 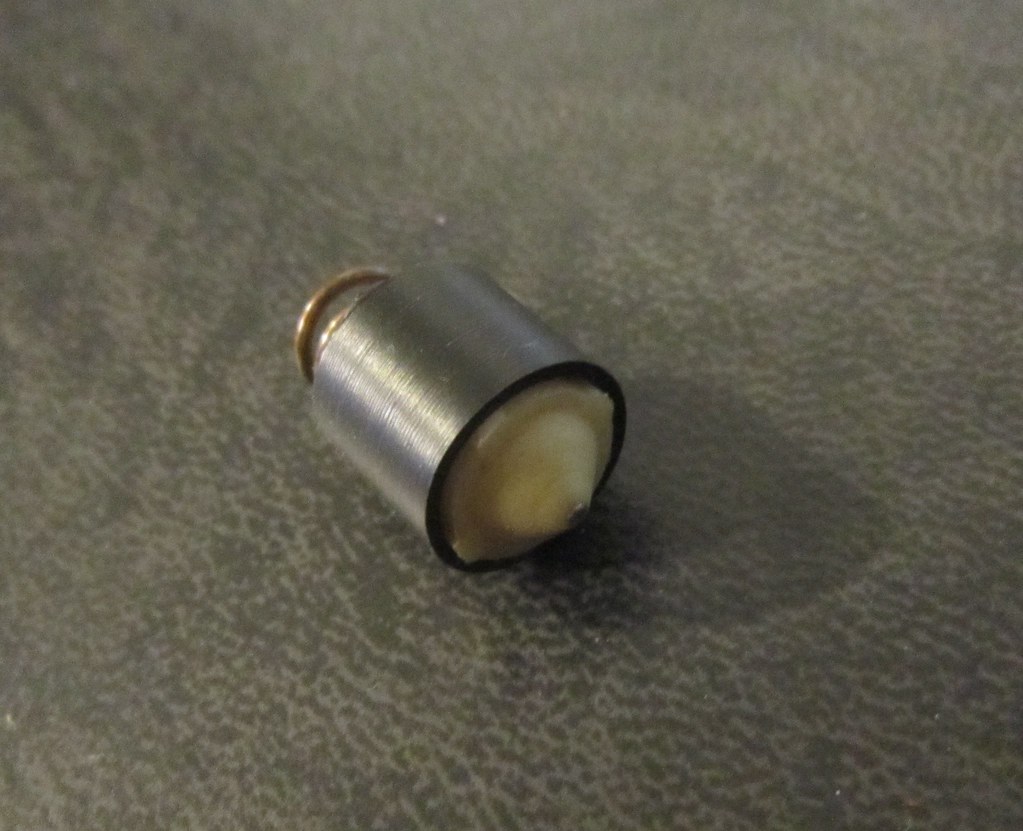 I didn't recall this thread, it's been a while. I need to find that reg and see if it still works .

Vance that should work with one provision, the barrel needs to be stainless, brass or plastic , a steel one is begging for rust issues.
A similar piece was used in the Royal Mistral.
Herman

That's an interesting fix!
The older I get the better I was.

I should have mentioned that the sleeve is delrin. It should probably be nylon. My new DivAir F has the seat w/o ridges, and this one is cut to the same dimensions. I'd prefer it to have 2-3 rings around it (filed to bumps) to keep it from tipping in the bore, but they do work w/o. The ridges on the HW seat leave gaps between the seat and sleeve, but that's just bonus airflow!

I installed it in my repaired DivAir, and it works fine. Another bonus is that the orifices seem to be a bit different. so a soft seat that doesn't seal in a HW can be used in the DivAir because there's a new surface.
Post Reply
26 posts

Users browsing this forum: No registered users and 23 guests