I was curious what makes everyone scour their different vintage books. Lately, I have been looking for material covering vintage deep diving, and rubber drysuits. Basic Scuba, by Fred Roberts, covers a couple of deep dives and covers the basic types of drysuits. It doesn't have a lot of information about drysuits without hoods though. Does anyone have other books that they enjoy that cover profiles and descriptions of deep decompression dives and rubber drysuits?

Ron
The impossible missions are the only ones which succeed. -JYC

While researching before writing my modest vintage drysuit monographs, I found three British diving books quite a help:

Captain Hampton's title is probably closest in content to Roberts' Basic Scuba, which I regard as the finest American book-length source when it comes to early drysuits and their use. The ninth chapter of The Master Diver and Underwater Sportsman, which is entitled "Protective Clothing", provides an authoritative overview of what was available in the way of exposure suits in mid-1950s Britain and more particularly the products of Dunlop, Heinke and Siebe Gorman, which were the main if not the only British diving suit manufacturers of the time. The suits included a couple of hood-less models, both wetsuits (Siebe-Gorman Sponge Rubber and Heinke Dolphin).

As for American vintage drysuits without hoods, there's the US Divers "Skin Diver's Seamless Suit": 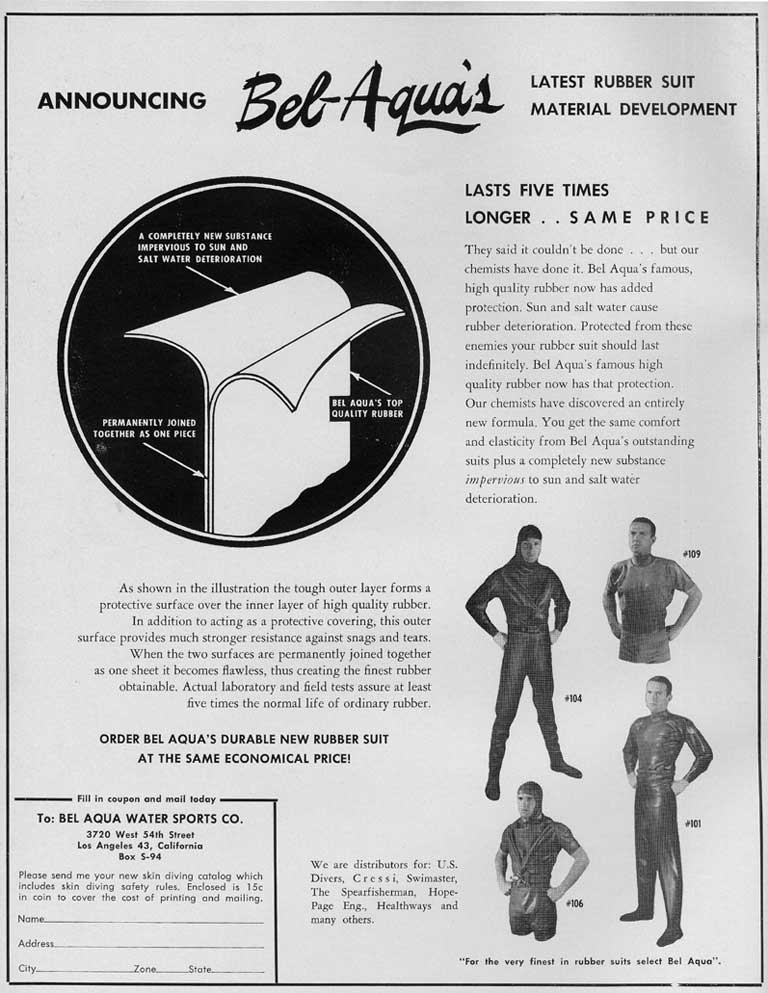 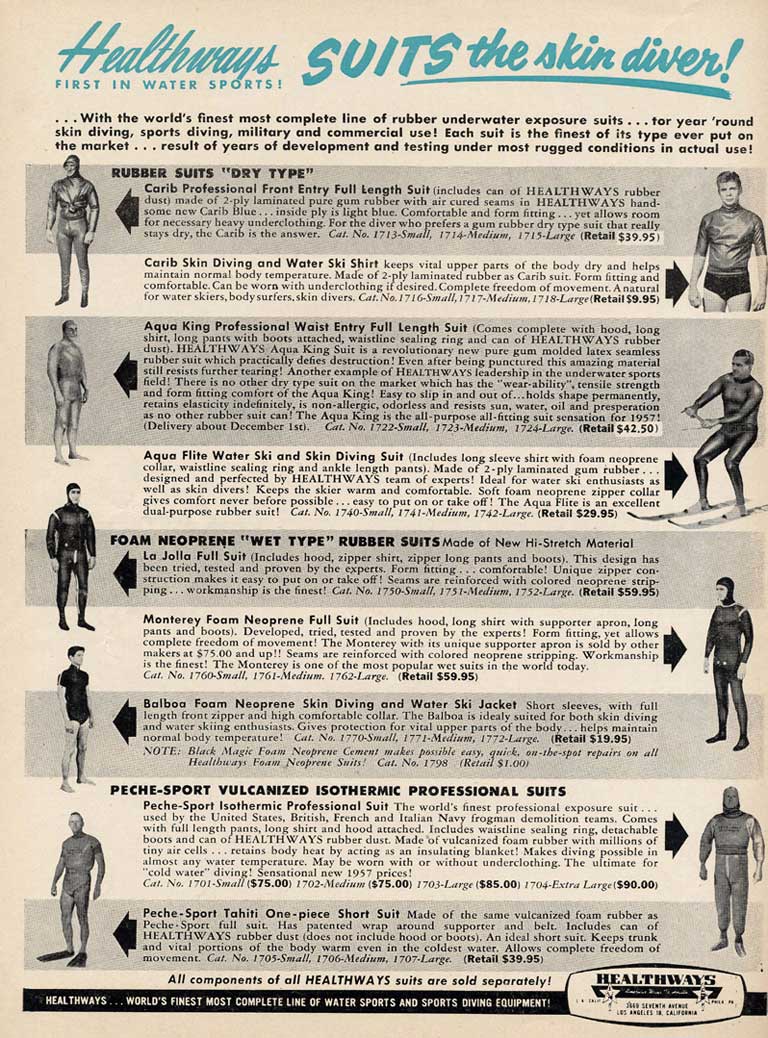 and there are several hoodless "swim shirts" from the period with neck and wrist/upper-arm seals, e.g.:

The "Skin Diving History" website showcasing the above suits was an indispensable source of information when studying the features of vintage drysuits, because the ads provide much greater detail than books tend to do.

I wish I could help more when it comes to books and documents about the interface between diving suits and deep-diving operations. To be honest, apart from the four books I've already mentioned, I've found most book titles less forthcoming on the subject than ads and manuals. Although the first chapter of a 1992 book entitled Drysuit diving: A guide to diving dry by Steve Barsky, Dick Long and Bob Stinton is devoted to "a brief history of diver thermal protection", it is frustratingly brief for my liking and, when it comes to the 1950s, it appears to say more about the invention of the neoprene wetsuit than it does about drysuits of the period.

Perhaps others can shed more light on Ron's enquiry?

That's an excellent start, thank you David. Like you, I have been frustrated by the content of most books with respect to using a vintage drysuit. Additionally, information specifically relating to the techniques of diving deep during the period are rare in books. Roberts' account of his deep dive in his book is the only one I could find that documents, specifically, how he did it. Cousteau's book The Silent World lists many deep dives, but not much in the way of the "how" of it. In addition to pursuing your UK books, I have procured copies of the following two books:

Supposedly, according to various blurbs I have located, both of these books cover both vintage drysuits and deep diving. I will post reviews when I receive them

Let me know where you find Owen Lee's book. I'd like to get another copy. I think I had one years ago. But then I also had a copy of Mask and Flippers by Lloyd Bridges as told to Bill Barada.

I found a copy on Amazon's used book market. I think there are a few left

The impossible missions are the only ones which succeed. -JYC
Post Reply
5 posts • Page 1 of 1